Pieter Saenredam documented his own art so well in inscriptions on his paintings and drawings that even lost work can often be identified. Now, however, a completely unknown composition has turned up, a view of the artist’s birthplace – even the house in which he grew up – in a touchingly personal painting.

In 1989, Marten Jan Bok and I wrote a book on the Haarlem painter Pieter Saenredam that opened with these words (quoted from the English edition of 1990):

ASSENDELFT Until he was eleven, Pieter Saenredam lived in Assendelft, a five-mile-long village scarcely one house deep, lining the road from Krommenie to Haarlem. Pieter lived in a house on the village square. Here all the official buildings of Assendelft clustered: the church of St. Odulphus, the village hall and the school. Pieter’s father was deacon, later elder on the church council, which also had a say in running the school; the village hall was supervised by his father’s uncle and guardian, the sheriff.

The late Kees Fens, a distinguished literary critic, paid us a compliment in his column in de Volkskrant of 15 July 1989 of which we are still proud: “Zo hoort een boek te beginnen” (That’s how a book should begin; it was the Dutch translation by Loekie Schwartz that charmed him).

The choice of that subject for the opening of the book was inspired by more than literary considerations. Marten Jan and I had visited the location together and – although the church has been replaced by another one, of the late 19th century, and the village hall and the school are no more – we found it striking that the lay of the land was still so recognizable. We saw in our mind’s eye the situation from the time Pieter was born, in 1597, until he moved to Haarlem with his mother in 1608. His father Jan Saenredam, one of the great engravers of Europe, had died the year before, when Pieter was still nine years old.

The places where Pieter Saenredam worked were never the same after he committed them to paper and paint. His single known painting of a building in Amsterdam – of the old town hall – became iconic during the life of the artist. (See the splendid high-resolution image on the website of the Rijksmuseum.) When the proud new town hall was erected, a model of classicist unity, the city fathers hung in their board room Saenredam’s painting of their former quarters, a grabbag of medieval buildings housing the bureaus and bank and meeting halls of the municipal government. In similar fashion, the look given by Saenredam to churches, public squares and town halls in Haarlem, Utrecht, Den Bosch, Rhenen and Alkmaar have fixed the appearance of those places in the collective memory of millions. But the place closest to him of all, the village square of Assendelft, could only be evoked in the mind’s eye of researchers.

That is, until the beginning of this month. At a viewing day at Christie’s South Kensington for a sale of Old Masters and British painting to be held on the 9th of December, a completely unknown painting of that very cluster of buildings, called the Kerkbuurt, the Church Neighborhood, turned up out of nowhere. It did not hang there for long before it was taken down and removed from the sale. Fortunately, the event was noticed and reported by the historian and art dealer Bendor Grosvenor, in a blog entry entitled “Withdrawn”:

This rather alluring canalside scene has been withdrawn from Christie’s South Kensington Old Master sale. [The painting is no longer listed on the Christie’s website.] It was called ‘Follower of Saenredam’ and estimated at £3-5,000. The picture, which shone out at me at the viewing when I saw it, is oil on panel, 14 x 20 inches, and signed ‘Ao.1634/P.Sanredam f’. The house in the left center, with the brick chimney and single gable, is the house where Pieter was born and grew up. To the right is the village hall, reported by the unconfirmed statement of a good researcher to have been built in 1614. Behind it is the church of St. Odulphus. The importance of this motif to the artist cannot be overestimated. As his biographers, we are thrilled more than we can say without waxing un-art-historically sentimental to be able now to see the Kerkbuurt through the eyes of Saenredam himself. (Although Saenredam’s hand in the execution of the panel has yet to be confirmed, there is no doubt in our minds that he was the author of the drawing on which it was based – and little that the painting too was made by him.)

The lost drawing on which the painting was based was undoubtedly made by Saenredam in August 1633, when he dated three other drawings on 9, 15 and 19 August (two of the interior of the church and one view of the Kerkbuurt from the southwest; the drawing is now in the Berlin Kupferstichkabinett), 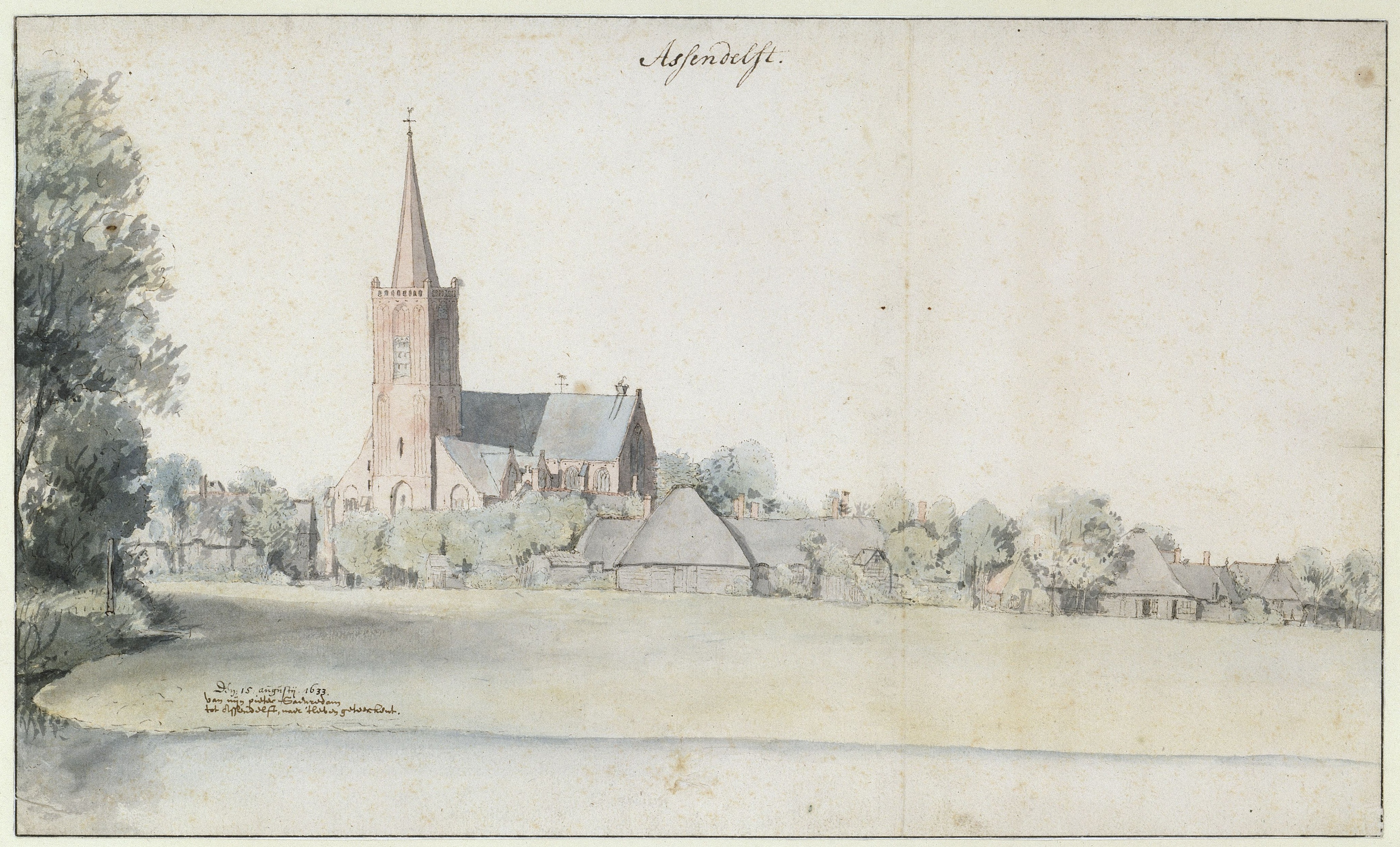 or in late July 1634, when on the 31st he drew one more interior. The date of 1634 on the withdrawn panel matches these documented visits of Saenredam to his birthplace.

Saenredam’s ties to this location in 1634, a quarter of a century after he moved away, were not only nostalgic. He still had close relatives attached to its institutions. His second cousin Barend Pietersz. de Jonge was sheriff and town secretary; Barend’s brother Cornelis was deacon of the Reformed Church. Although he had recently moved to Den Bosch, a third brother, the Reformed minister Johannes Junius (Jan de Jonge), had preached in Assendelft until 1631. These second cousins were far closer to Pieter than the formal relationship suggests. Their father, Pieter de Jonge, had been the guardian of Jan Saenredam when he was orphaned at the age of nine, and by a weird stroke of fate became that of Pieter when Jan died when his son was the same age. Pieter’s second cousins were uncles and brothers to him. 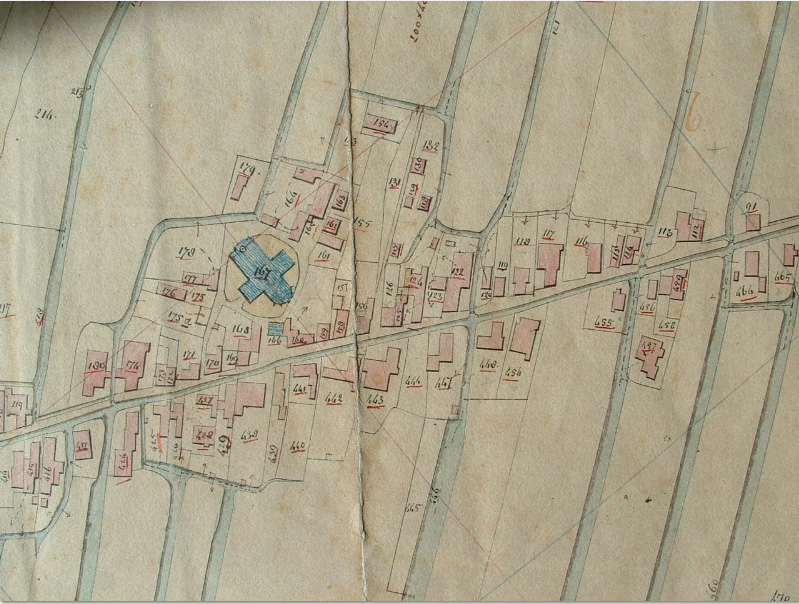 When the topography of Assendelft was recorded in detail in 1828 for the official records, the Kerkbuurt had not changed much over the previous two centuries.

Zooming into the purview of the painting, we can locate the draftsman’s standpoint approximately thus: 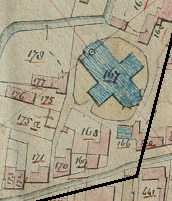 We must say approximately, because the artist has made the village hall (166) more prominent than his father’s house (168), which was actually more than twice as large. Otherwise, the situation is unchanged. With the emergence of this painting, the history of the Kerkbuurt in Assendelft has acquired an astonishingly enriching street-view version of the place on a summer’s day in the early 1630s.

The details of the painting are captivating. The pole to the right of the entrance of the village hall literally so: it was the scourge to which convicted criminals could be chained as part of their punishment. The historian of Assendelft, Bert Koene, came across a municipal ordinance forbidding visitors from tying their horses to the pole. How can we not be intrigued by the woman walking on the square with a child, who seems to be conversing with the woman leaning on the half-door of the Saenredam home? A typical Saenredam figure is the man looking up at a notice posted on the village hall. He is kin to the gazers at organs, church decorations, coats of arms and other objects of interest in Saenredam’s paintings.

What life-changing luck it would have been to have been able to buy this painting for the price of Christie’s estimate. Instead, as Grosvenor continued: “Perhaps the astonishing price made the last time a lowly estimated Saenredam was sold caused the auction house to have last-minute doubts. Or perhaps it was the sight of the world’s old master dealers queueing up to take a closer look…” If the painting is as good as I think it is, if Christie’s plays its cards right, and if “the world’s old master dealers” bid against each other rather than resorting to some other means of getting hold of this treasure, it can go for a thousand times more than the low estimate at South Ken.

[Addendum of 4 July 2012: yesterday, at Christie’s old master paintings sale 5602, Saenredam’s View of Assendelft was knocked down for 3,737,250 pounds, 1245 times the low estimate in the December sale from which it was withdrawn.]

© Gary Schwartz and Marten Jan Bok 2011. First published on the Schwartzlist on 25 December 2011, small revisions on 29 December and 5 January 2012. Syndicated on TheArtsFuse on 28 December 2011. With kind thanks to Eddy Schavemaker for calling the painting to our attention, to Bert Koene for commentary and for supplying us with the 1828 groundplan of Assendelft, to Holm Bevers for the image of Saenredam’s drawing of the Kerkbuurt and to Christie’s Old Masters for the image of the painting.

Following the initial publication of Schwartzlist 316, I received a mail from a longtime subscriber, Christiaan Hijszeler. He had seen the painting of Assendelft during the viewing days in London and arrived at the same conclusion as we did concerning motif and probable authorship. Hijszeler is particularly interested in the reconstruction of provenances, and on 29 December he delved into the notes left by Cornelis Hofstede de Groot (1863-1930) to the institute of which he was co-founder, the Netherlands Institute for Art History (Rijksbureau voor Kunsthistorische Documentatie). In the online “HdG fiches,” a precious new resource, he found unmistakable 18th- and early 19th-century references to the rediscovered painting:

This find is invaluable for future research into the history of the painting.

Christiaan Hijszeler also provided me with a scan of the online entry on the painting from the Christie’s website before it was withdrawn. This contains additional information concerning the provenance of the painting. With kindest thanks to this attentive and generous reader. 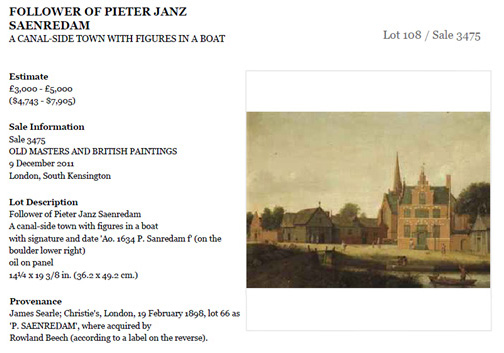 In 2011 I lost two precious resources for news that I thought were mine forever. The BBC discontinued its AM transmission of the World Service to the Netherlands, robbing me of access in the car – the only place I have time to listen to it – to the best news radio in the world. And the NRC Handelsblad, which had been my newspaper for over 40 years, cheapened itself beyond recognition by going tabloid and in other ways betraying its reputation as a quality newspaper. Concerning the loss of life among my circle of friends I will say nothing except that it was extreme. I could deny that I am diminished, as I deny as many other signs of decrepitude as I can, but I have no inclination to try. That I still enjoy life as much as I do is a wonder. I wish the same to all readers.

When we finished our book, Marten Jan Bok and I resolved to keep up with research on him and regularly to publish new findings. We haven’t done this very much, and it was a pleasure to collaborate with him on this column. It pleases me as well to recommend the “100% cynicism-free art” of Marten Jan’s wife Kitty Kilian: http://kittykilian.nl/category/blog/. She lives up to and improves on the claim with the wittiest art you will find on Internet.