The world press has announced that a painting of an old man in Woburn Abbey, England, has been newly discovered to be an authentic Rembrandt. Schwartz, who included the painting in his book on Rembrandt of 1984, as have all other cataloguers of Rembrandt paintings from 1836 on, is incensed that the abbey practices such flagrant spin, and that the press feeds it to us so uncritically.

Yesterday evening, in an opening at the Rijksmuseum, I was asked by an innocent newspaper reader whether I had heard the news: an unknown Rembrandt portrait had been discovered in a private collection in England! Since unknown Old Masters do show up in private collections in England with some frequency, I ran to Internet as soon as I got home. When I saw what it was all about, all I could do was groan. Here is how the BBC put it on its website:

‘New’ Rembrandt portrait to be unveiled at Woburn Abbey. An oil painting of an old man that has been newly authenticated as a work by Rembrandt is to go on public display at Woburn Abbey in Bedfordshire this week. The painting – known as The Old Rabbi – was last exhibited in 1950 and has hung ever since in a private room. Last year Ernst van de Wetering, a leading expert on the 17th Century artist, was invited to study the work. He said it was “an outstanding specimen of Rembrandt’s art” that impressively depicted “dignity in old age”. “This is a discovery and a fine addition to the abbey’s wonderful collection of Dutch art,” said general manager Jonathan Irby. “We are very excited about bringing this exquisite painting into the public eye, especially since visitors will be able to get within a few inches of it.” (The source of the story is a more extensive text issued by Woburn Abbey, now on the abbey’s website.)

The “discovery” is in fact nothing of the kind. The painting in Woburn Abbey is included in every single catalogue I know of the paintings of Rembrandt, 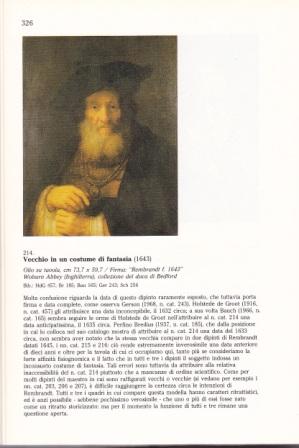 to Leonard Slatkes in 1992. Only one colleague, Christian Tümpel, in his monograph of 1986, ever assigned it to a pupil of Rembrandt’s rather than the master. When the painting was exhibited in 1950 in Edinburgh, Jan van Gelder, one of the greatest art historians and connoisseurs of the 20th century, wrote this about it: “… always wrongly placed within the chronology of Rembrandt’s work is the portrait of an Old Jew. After cleaning we find it signed and dated 1643, not 1633 (see Bredius 185). There can be no doubt about its authenticity.” (J.G. van Gelder, “The Rembrandt exhibition at Edinburgh,” The Burlington Magazine, vol. 92, nr. 572, November 1950, p. 328.) Although this may be phrased a bit defensively, I know of no printed record of doubt concerning the authenticity of the painting.

If there is any problem at all associated with the Woburn Abbey Jew Rabbi, it is that the owners and managers of the abbey, the property of the Duke of Bedford, have kept it out of public view for over 60 years. It was hidden from visitors and never lent out for display elsewhere. Even the authors of the standard catalogues of Rembrandt’s paintings from the 1960s, Kurt Bauch and Horst Gerson, included it on the authority of van Gelder without having seen it themselves, as did I in the 1980s. Slatkes wrote in 1992: “Such errors [concerning the dating and the subject of the painting] are … attributable to the relative inaccessibility of cat. nr. 214.” For Woburn Abbey to boast with self-satisfaction that tomorrow it is placing “within a few inches” of the visitor a Rembrandt that it wilfully sequestered for over half a century, smacks of spin.

I find it equally nervy to call the present turn of events a “discovery.” What this implies is that the opinion of van Gelder, which was also based on first-hand observation, is just so much chopped liver beside that of Ernst van de Wetering. In fact, van de Wetering has added very interesting new information to what we know about the painting, and he is not responsible for the Woburn Abbey hyperbole. But the entire affair was born of and contributes to the unfortunate fixation on the Rembrandt Research project that distorts relationships within the field.

What should have been done? If Woburn Abbey wanted fresh art-historical information and opinions concerning its withheld masterpiece before finally showing it to visitors, it should have lent the painting for a year or more to the National Gallery or another prominent, easily accessible venue. It should have commissioned a thorough technical examination, making the results generally available. And it might have organized a symposium open to all workers in the field. 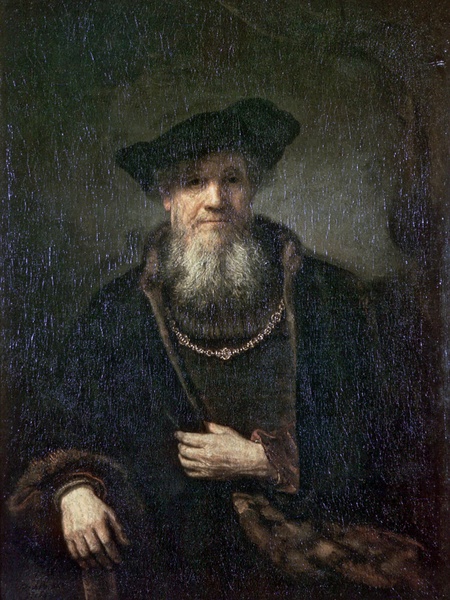 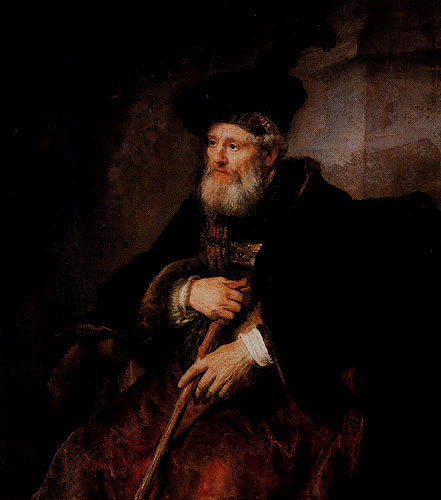 There are lots of interesting questions surrounding this painting. Slatkes wrote: “As in the case of many of Rembrandt’s paintings of old men and women, it is difficult to be certain about Rembrandt’s intentions…. For the moment, the function of all three … of the paintings in which this same model appears [ – the others are in Berlin and Oeiras, Portugal, both dated 1645 – ] … remains an open question.” One could add the same about the costume and the identification of the model as a Jew or rabbi. 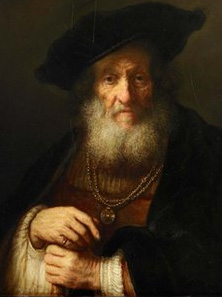 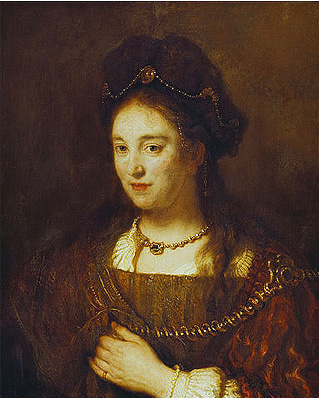 Van de Wetering brings the painting into connection, both in technique and subject matter, with a panel in Berlin of a woman, suggesting that they depict Boaz and Ruth from the Old Testament Book of Ruth. Rembrandt’s old men and women offer promising cases for testing the “workshop theory”- that the products of the Rembrandt studio need not necessarily be the work of one mind and one pair of hands alone. There is juicy material here, calling for open, interdisciplinary discussion.

Instead, whoever was acting for the Duke of Bedford invited the one-man Rembrandt Research Project in the person of Ernst van de Wetering to a closed examination of the painting. His “authentication” is now being announced as a discovery, although the proposition concerned has hardly ever been questioned during the past 175 years. This should be dispiriting not only for those of us with our own opinions about Rembrandt, but also for museumgoers and consumers of the media. The idea that only the opinion of the Rembrandt Research Project matters is bad enough, but that even media as distinguished as the BBC show not enough interest to consult the basic literature before going public makes you despair of getting a straight story from the press.

Is there something wrong with me for getting upset about all of this? If so, stop me before I rant again. If not – why don’t more colleagues object to such patent distortions of art scholarship and betrayals of the public trust as the Great Woburn Abbey Rembrandt Discovery?

Reactions are always welcome at Gary.Schwartz@xs4all.nl.