The more we find out about the physical facts concerning works of art, the more aware we grow of the dangers of former and present-day restoration and conservation measures, and the narrower the margins become for responsible treatment. Yet, restore we must – or must we?

From 13 to 16 May 2013 you can attend a symposium at the National Museum of Denmark on “Conservation in the 19th century.” The first item on the agenda – “Nineteenth-century treatment methods that have withstood the test of time (are there any?)” – is dear to my heart, especially for the parenthetical question.

The best-known 19th-century treatment method is the technique for the “regeneration” of decayed varnish developed by the German physicist Max Joseph (from 1883 on: von) Pettenkofer (1818-1901). The problem addressed by this method is that the varnish applied by artists and restorers to protect the pigments of a painting and to heighten its brilliance tends with time to turn yellow and brittle. Rather than removing the varnish, which could endanger the painted surface, Pettenkofer developed a means for softening it and making it more transparent. He did this by exposing the surface to alcohol vapor, contained in a wooden box that was moved around the painting.

“The varnish along the edges of the aging cracks has not broken cleanly, but instead flows indistinctly into the craquelure. This indicates that the varnish layer has been regenerated.” (Knut Nicolaus, The restauration of paintings, Cologne 1998, p. 354; on the cover and dust jacket more properly The restoration of paintings.) Virtually every prominent Old Master painting that was in a museum between 1870 and 1930 was subjected more than once to this treatment.

From 1870, when Pettenkofer published his method, to the 1930s, this was the treatment of preference for yellowed varnish. All along, there were critics who noted that the treatment had only shortlived effect and that it softened the paint layer as well as – half, not all of – the varnish, but not until the 1980s was it demonstrated that varnish softened in this way flows into the craquelure of a painting, permanently affecting its total aspect. Tens of thousands of paintings – the majority of Old Master paintings on display in art museums today – will never be the same as they were before Pettenkofer.

I found out about the Copenhagen symposium from its organizer, Jørgen Wadum, at the 15th annual meeting of CODART in Brussels on 18-20 March. He was one of the three speakers at a brilliant opening session, along with Ron Spronk of Queen’s University in Kingston, Ontario, and Joost van den Auwera of the Royal Museums of Fine Arts of Belgium in Brussels. The session was devoted to the relative roles of curators and conservationists in the care of works of art. Ron Spronk showed how a dramatic shift has taken place in this relationship. A century ago, the art historian-connoisseur always had the last word when it came to restoration policy and decisions concerning individual objects. Today curators generally defer to conservation scientists. As I listened, it occurred to me that this development reversed the usual rule that increased knowledge brings increased freedom. In art conservation, the more we know about the physical facts the more narrow our choices become. The scientists who are now in the ascendancy at major museums know more about the unintended consequences of interventions in normal aging processes than do art historians, and are prone to make more conservative recommendations than a masterpiece-mongering curator.

Art conservation is a very pragmatic field, full of compromises. In the belief that its practitioners might benefit from a bracing confrontation with non-compromising principles, let me sketch two extremes in the treatment of art. The first accepts as a priority the desire to slow the action of time on the art object as completely as possible. 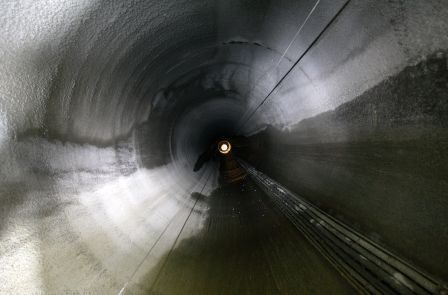 The best way to do that would resemble the means being taken for the storage of nuclear waste at the Onkalo (hiding place) in Finland. Five hundred meters below the surface, “the waste will be secured through a system of ‘multiple barriers,’ the first being the Finnish bedrock itself, the rest engineered from steel and concrete, with the waste fuel rods stored in corrosion-resistant copper canisters with five centimeter-thick walls.” The construction is intended to be stable for 100,000 years, the longest duration ever conceived by human builders short of the eternity that the engineers of the pyramids presumably had in mind a mere 4,000 years ago. (The biggest problem faced by the designers is finding a way to communicate with humans living as far into the future as the entire duration of present-day humanity itself.) Art stored in this way would be free of most of the effects that now cause it to deteriorate: shifts in temperature and humidity, mechanical jarring, insects, and nuts who attack art with carpet knives and acid. That no one will ever see the art again is a disadvantage that of course means that the plan will never be implemented. However, keeping the Onkalo alternative in mind sharpens our awareness that we are sacrificing optimal stability by moving art around the way we do and by punishing it through exposure to the body vapors of museumgoers. It also faces us with the fact that we are accelerating the aging of art in order to enjoy it.

The opposite end of the scale is well represented by the treatment undergone by Picasso’s majestic Guernica between 1937 and 1956. The guiding principle was the imperative to display it in as many places as possible to the widest possible audience, with no more than lip service paid to issues of conservation. The canvas of 3.5 x 7.8 meters is said to have been rolled up 50 times (and therefore unrolled and stretched 50 more times) for exhibitions in North and South America and Europe before coming to rest, in stages, in Madrid. Every one of these measures did greater or lesser harm to the painting, as did the displacements themselves and the circumstances of display, which cannot all have been optimal. (Surprisingly, Guernica has hardly ever been attacked by ideological vandals or mental cases.)

No doubt Guernica has been repaired and restored expertly. However, every intervention of this kind also takes the painting one step further from its original condition to its eventual demise. A word about what I mean by the demise of the work of art. Most art objects indeed perish completely in the course of time. (See my article of 1996 on the mortality of art.) But a good number are kept alive through the devotion of owners and the ministrations of restorers. Care of that kind inevitably reflects the taste of the times, fashions in restoration practice, and the state of conservation science. All of these systems being in constant transformation, the results of any given intervention bear an increasingly distant resemblance to what the work of art once was. At a given moment, that resemblance will become unreconstructible, and the object we admire on the museum wall will have become the dynamic product of an unending committee meeting in which the artist had only one initial vote.

The restoration of art robs us of another value that I cherish, non-aesthetic though it may be. Bit by bit, I am assembling the elements of a time machine, a device that can interpret existing evidence to reanimate the past. Great advances in this direction are being made all around us, in mutually unconnected fields like archaeology and ethno-archaeology, history and reception history, manuscript studies, astronomy, geology and the life sciences. (As of now, the assembly of my time machine has been taking place only in my mind, which has proved again and again to be an unstable support. Must put it down in bits and bytes one of these days.) Works of art provide important evidence for this procedure. One aspect of the issue is put into words succinctly on the website of an innovative project, called Bosch & Bruegel, on four versions, in Tallinn, Copenhagen, Glasgow and a private collection, of a delightfully weird 16th-century composition. Of the painting in Tallinn, the researchers remark: “On the surface of the painting there are all sorts of dirt, forming a ‘cultural layer’, which might give us a hint of the conditions where the painting has been. Besides dust there is human and animal hair, also tiny bits of coal – [the] painting might have been in a room with an open fireplace.” A cleaning of the painting by current methods will remove or distort that cultural layer and create a hole in my time machine. Sad to say, most damage of this kind has been perpetrated already on Old Master paintings.

Sometimes I wish I were single-minded enough to follow up on these commitments and to picket museums, like the late James Beck, with admonishments to keep their hands off the art. But I am so susceptible to the delights of a well-cleaned painting or an ingeniously restored altar that I go weak in the knees before the zealot in me gets a chance to climb his soapbox. 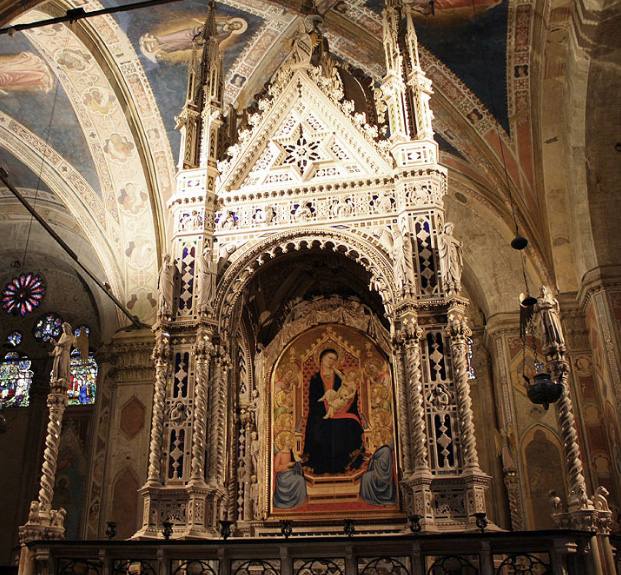 The altar that knocked me off my feet was Andrea Orcagna’s tabernacle in Orsanmichele in Florence, framing a magical Madonna by Bernardo Daddi, restored the last time I saw it to within an inch of its everloving (but not everlasting) life. 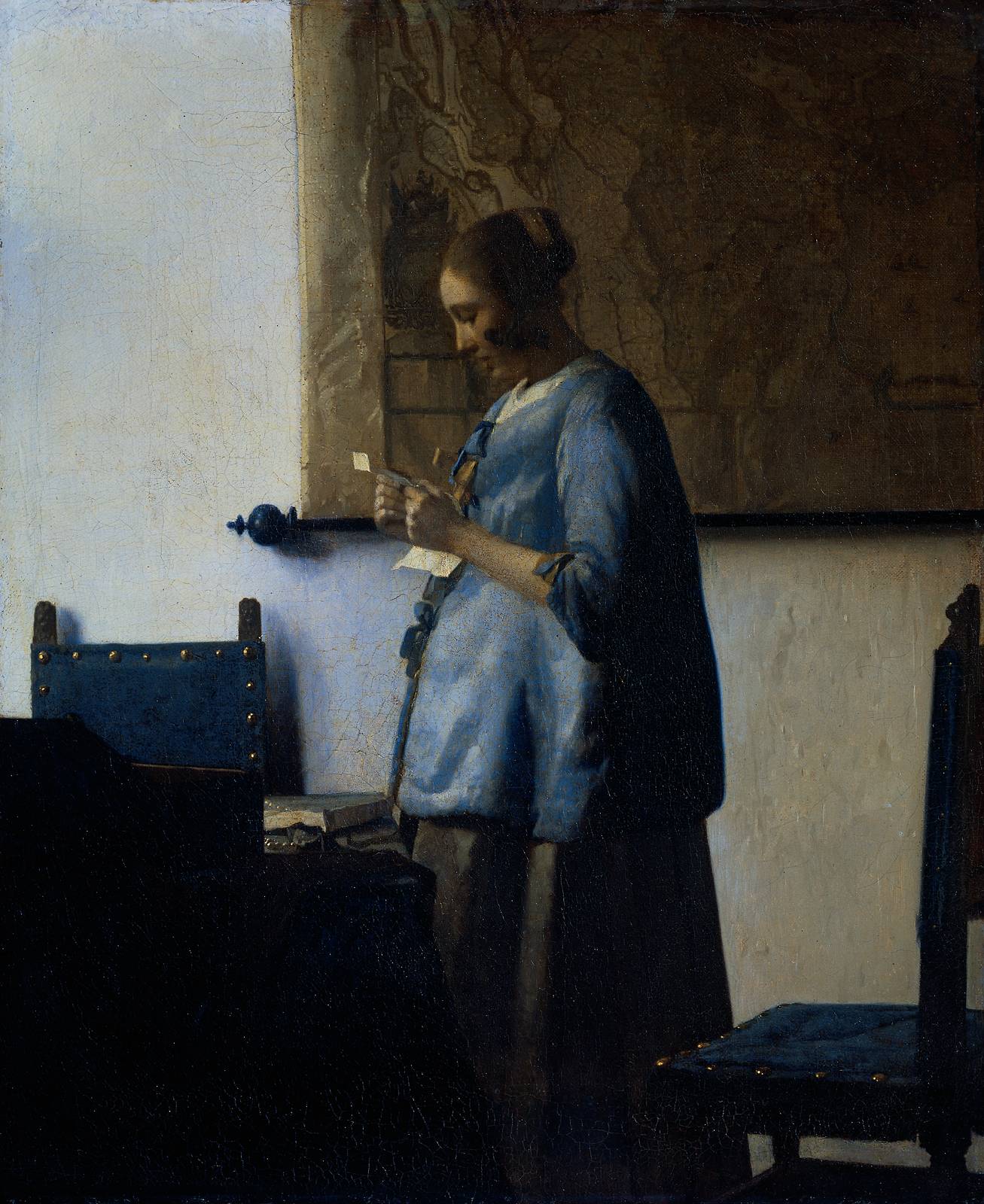 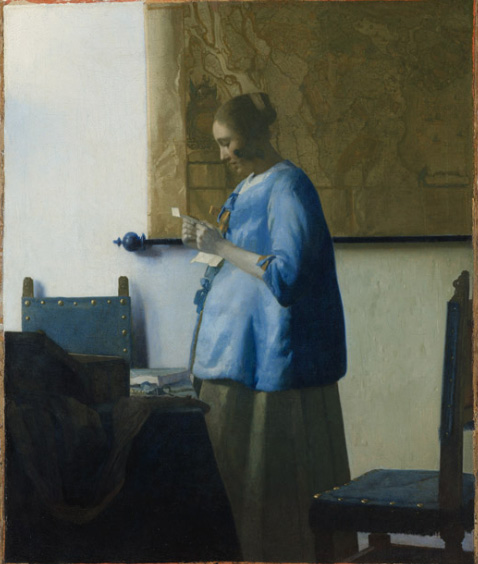 And the painting? Johannes Vermeer’s Woman reading a letter, now on display in the Rijksmuseum with a presentation of its newly completed restoration. Although I never noticed before the cleaning (left) that it needed one, when I saw the results (right) I was instantly won over. Whether or not Vermeer would once more sign for the famous blue of the woman’s cloak, I was enchanted by it. Perhaps, perhaps … works of art do not die at all in the way I described, as long as successive generations of viewers keep pace with them for the next 100,000 years. In that case, it might be better to change the title of the professionals who regenerate them from restorer to recreator.

This year Loekie and I have resolved – not vowed – not to travel. We see this as a corrective to the long years, from 2006 through 2011, when we traveled a lot. It is also an austerity measure, to save our share of the 25-35 billion euros that the Dutch government has idiotically decided to scrap from its budget. In this, as usual, I am in agreement with Paul Krugman, who wrote in the New York Times last week of “Europe’s economic suicide.” (If it opens for you.) The Netherlands has moreover committed political suicide by forming a (now fallen) center-right-wing government that could only function with the support of the vicious populist Geert Wilders. The day before yesterday Wilders withdrew that support and the cabinet fell. The government parties, CDA and VVD, put on a show of being astonished and incensed. That the devil with whom they had taken tea now splashed his cup in their faces was a totally unexpected affront. Asked whether they accepted any responsibility at all for this ill-timed disaster 15 months into the 4-year cabinet period, the leaders of both parties went into spasmodic denial. What, us?

I am caught on the horns of another dilemma, like the conservation conundrum. As pleased as I am that the hypocritical Rutte cabinet has fallen, and as pleased as I am that Wilders will not soon be asked to join or support a future cabinet, I am disconcerted that Wilders’ stated reason for withdrawing his support – that he refused to approve the austerity measures proposed by the cabinet – is so close to my own judgment, and Krugman’s. Straws to clutch on, anyone?

Reactions are always welcome, to Gary.Schwartz@xs4all.nl