Cultural pessimists who are sure of the ongoing decline in our appreciation for art will have no choice, after reading Schwartzlist 321, but to change their tune if not their mind. 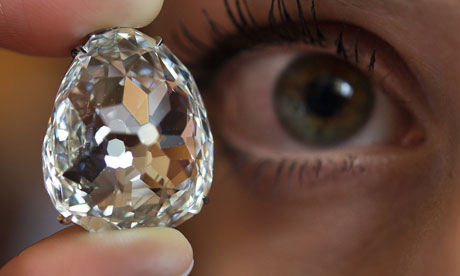 Photograph: Fabrice Coffrini/AFP/Getty Images, from The Guardian, 16 May 2012

Last week a fabled diamond, the 35-karat Beau Sancy, was sold at Sotheby’s in Geneva for 9,042,500 Swiss francs. (On the Sotheby’s page, click on “Catalogue notes and provenance.”) For various reasons, I did not consider making a bid. For one thing, we have no place in the house where the gem would be retrievable to us and us only. More than once in the past, diamonds we owned have been retrieved by others or have otherwise slipped from our grasp. It would be a pity if that were to happen to such a nice stone as the Beau Sancy.

My imagination was pricked by the sale for another reason. The history of the Beau Sancy took me back to the years around 1640, when it passed into and out of the orbit of the greatest Netherlandish artists of the day, the Dutchman Rembrandt (1606/07-1669) and the Brabander Rubens (1577-1640). The bearers were the Italian-French queen mother Maria de’ Medici (1575-1642), the German-Dutch prince of Orange, Stadholder Frederik Hendrik (1584-1647) and possibly the French-Spanish Jew Alfonso Lopéz (1572-1649).

In August 1638, the Netherlands was paid an embarrassing surprise visit by the exiled queen mother. She sneaked across the border from the Southern Netherlands and challenged the Republic to negotiate on her behalf with her enemy Richelieu to mend things between herself and her son Louis XIII. She was desperately low on cash. So much so that she sold her prize possession, the Beau Sancy, to Frederik Hendrik for 80,000 guilders, when a dealer kibitzing on the transaction said it was worth nearly twice that much.

What did Alfonso Lopéz have to do with this? There is nothing on record, but listen to these pieces of biographical information about him from the Historiettes of Gédéon Tallemant de Réaux (1619-92), concerning which “independent testimony has established the substantial correctness of his statements” (Wikipedia): “Il avoit chez lui un homme à qui il donnoit huit mille livres par an… Cet homme tailloit les diamants avec une diligence admirable, et avoit l’adresse de les fendre d’un coup de marteau quand il étoit nécessaire. Ensuite toutes les belles pierreries lui passèrent par les mains.” (He had a man in his service, at 8,000 livres a year, … who cut diamonds with admirable skill and was able to split them with a single hammer blow when this was required. Eventually all the beautiful stones passed through his hands.) … “La Reine lui devoit vingt mille écus pour des perles; et comme il pressoit d’Esmery pour être payé, l’autre lui donna en paiement une taxe d’aisé de soixante mille livres.” (The queen owed him 20,000 écus for pearls, and when he pressed [Superintendent] d’Esmery for payment, he was given a tax reduction of 60,000 livres…)

As for Lopéz’s relation to Frederik Hendrik at the time, he was dealing with the prince’s claim against the French crown of “50 or 60 thousand guilders,” in Frederik Hendrik’s sloppy phrase, while engaged in trade in arms, textiles, jewels, gems and Asian artefacts on a world-class scale. This man being in the Republic – he lived there from 1636 to 1641 – when the negotiations between the Dutch court and the entourage of Maria de’ Medici were being conducted concerning the Beau Sancy, it seems to me unlikely that he was not involved in some way.

Lopéz did not call himself a Jew, but everyone else did. Tallemant: “Je me crevois de rire, car mon père étoit son voisin, de le voir manger du pourceau quasi tous les jours. On ne l’en croyoit pas meilleur chrétien pour cela.” (I would collapse in laughter when my father, who lived next door to him, told me that Lopéz ate pork nearly every day. No one thought this made him a better Christian.) Putting the issue more bluntly: “Lopès vendoit un crucifix bien cher: ‘Hé, lui dit-on, vous avez livré l’original à si bon marché.’” (Lopez sold a crucifix for a high price. “Hey,” they said to him, “you supplied the original so cheaply.”)

Alfonso López was the owner of one of Rembrandt’s first paintings of a subject from the Jewish Bible, Bileam’s ass (1626), now in the Musée Cognacq-Jay in Paris. He also had contact with Rembrandt in the period of the diamond sale. Portraits from Lopéz’s collection – no less than Raphael’s Castiglione and Titian’s Ariosto; he operated at that level – helped Rembrandt define his own most glamorous self-image. The Night Watch – of this I am sure, even if some of my colleagues are not – is replete with references to Maria and her entry into Amsterdam. 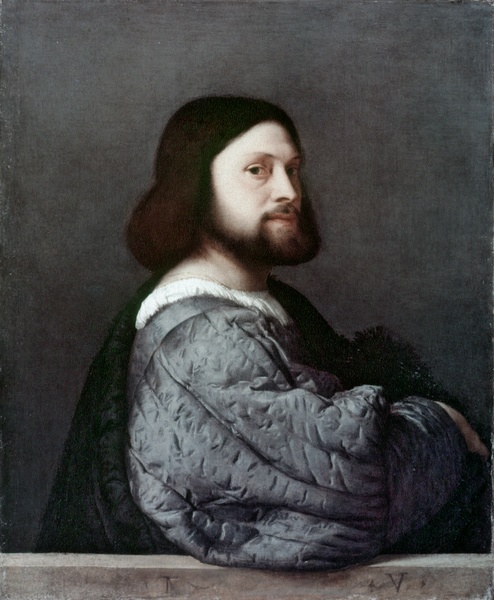 When in 1640 Rembrandt painted the self-portrait now in the National Gallery, London, both Raphael’s Portrait of Baldassare Castiglione (Paris, Louvre) and Titian’s so-called Portrait of Lodovico Ariosto (London, National Gallery) were in Amsterdam in the collection of Alfonso Lopéz. The Raphael was knocked down to Lopéz at an auction at which Rembrandt was present, as we known from his sketch and annotation (Vienna, Albertina).

The involvement of Rubens with Maria de Medici went much, much further. He was the author of the 21-piece series of monumental paintings (1622-24) defining her queenship, her marriage to Henri IV in 1602 and her destiny, painted for her Paris domain, the Palais de Luxembourg. Their ties were such that it was Rubens who arranged for Maria’s flight to the Southern and then to the Northern Netherlands. The reversal of fortunes of the patron and her client reached a symbolical climax when Maria, a destitute persona non grata, ended her days in the very house in Cologne where Rubens was born.

At the time, neither Rembrandt nor Rubens could have bought the Beau Sancy. But the posthumous increment in the worth of their art has far exceeded that of the diamond. The ratios are best expressed with reference to median incomes in 1640 and 2007, the last date available to me.

In other words, for the 80,000 guilders that Frederik Hendrik paid for the Beau Sancy in 1640 he could have bought 50 Rembrandts or Rubenses, which today would be worth 2.5 billion dollars, 277 times more than the present worth of the diamond.

But could he have? The Dutch court did everything it could to commission a painting from Rubens towards the end of the master’s life and did not succeed. Like the good woman in Proverbs, his work was more precious than gems. After 1640, Frederik Hendrik did buy two more Rembrandts, for which he paid 1,200 guilders apiece. However, even the increase in value of a good painting by a minor master, from 20 guilders in 1640 to $50,000 in 2007, would outdistance the record of one of the best diamonds in existence.

These figures should give pause to TEFAF visitors who think that they are better off sinking their millions into the goods of Graff and Harry Winston rather than those of Marlborough and Johnny van Haeften. 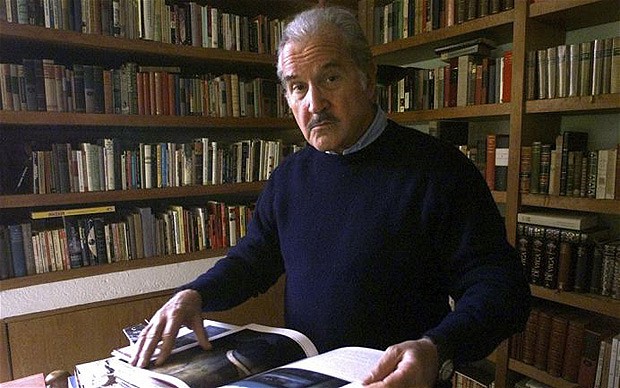 As sorry as I was to lose Carlos Fuentes last week, I was nonetheless deeply pleased that he reached the age of 83. I almost killed him when he was 37. We were in Rome together in October 1965, with my sister Carol, and I felt that I owed it to my dignity as a fresh all-but-dissertation Ph.D. in art history to show the son of the former Mexican ambassador to Italy a sight he had not yet seen. I settled on the underground San Clemente, one of the most fascinating places on earth. The Romanesque church above ground itself is enough to knock you over, but beneath it are even more unusual structures: the remains of a fourth-century basilica, a first-century sanctuary of the Persian-Roman god Mithras, and a Roman street at a depth of 57 meters below the surface.

I should have noticed by the time we got to the Mithraeum that Carlos was panting and looking pale, but I was too excited to give up and I pressed on. At a given moment he had to ask if we could leave. He was fresh from Mexico, and he was already running a flu from the autumn Roman weather. Looking like he was about to collapse, he got into a cab to go back to his hotel. I hardly dared to speak to him after this incident, but he didn’t hold it against me.

The way we met was characteristic of the man. The month before, September 1965, we were fellow passengers on the S.S. France from New York to Le Havre. Carlos was booked in first class, and I in tourist – insanely luxurious for a graduate student, but affordable at as I recall some $300. The sumptuousness of the crossing was augmented when the Frenchman with whom I was supposed to be sharing a cabin took one look at me and disappeared, leaving a double cabin for me alone. (Unfortunately, the gorgeous girl who hesitantly visited the cabin also left me alone in the end.) Carlos ate his meals in the first class dining room, but he spent the rest of his time belowdecks. “The people in tourist are more interesting,” he explained simply. I’m sure he made an exception for a fellow passenger of his in first class on that crossing, Alberto Giacometti, who died a few months later. Giacometti sailed on the France with his pet ocelot Babou, although I’m not sure that he had it with him on that voyage.

I saw Carlos for the last time in 2006 when he came to Leiden to give the Huizinga Lecture in the Pieterskerk, which I missed, and a lecture at the university that I attended. His presentation was lively and intelligent and anything but academic. He spoke about literature and life, politics and humanity, in direct and sympathetic terms.

I should have seen him more.

Passage about Alberto Giacometti added on 29 May 2012.