Three spectacular current exhibitions set out to restore the look and content of past displays of art. Antwerp Cathedral in the sixteenth century, an Antwerp merchant’s house in the seventeenth and the greatest English collection of the eighteenth have been endowed with their historical look and contents. Schwartz is deeply content.

With the potent presence of the fifteenth, sixteenth and seventeenth centuries in its streets and monuments, Antwerp always brings you back in time. On my virtual list of cities that once were the greatest in the world, Antwerp occupies a shared first position with Madrid for the third quarter of the sixteenth century. The rulers of those cities and their realms who looked at the maps and globes that were being produced for them will not have seen worthy rivals for their economic, commercial and military might anywhere on the newly spheroid planet. For Antwerp, add the element of artistic prominence, which continued to operate down through the lifetime of Peter Paul Rubens, 1577 to 1640. Among the buildings that still emanate a surpassing historical thrill are the cathedral (1352-1521), the town hall (1561-64), the church of Carolus Borromeus (1615-21) and more subtly the interior of the Sint Jacobskerk (1491-1656).

Visiting the city on a rainy day in June, Loekie and I enjoyed an impressive enhancement of the historical environment in two locations, the cathedral and the mansion of the burgomaster and art collector Nicolaas Rockox (1560-1640). Rockox’s house in the Keizerstraat was bought in 1970 by the KBC Bank, which maintains it as a museum dedicated to the contribution of burghers to the artistic and collecting environment of Antwerp. This is a very worthwhile aim; the art life of the city from the early seventeenth century became increasingly dependent on wealthy enthusiasts. That raises an interesting point for the study of Dutch art as well. The hoariest cliché in Dutch art history is that after the Northern Netherlands abolished the aristocracy and the Catholic church, art became an affair of the bourgeoisie. But much the same thing happened in the Southern Netherlands, where aristocracy and church retained their elevated status throughout the ancien régime. Even within the churches, the main donors were Antwerp families. Time for a rethink? 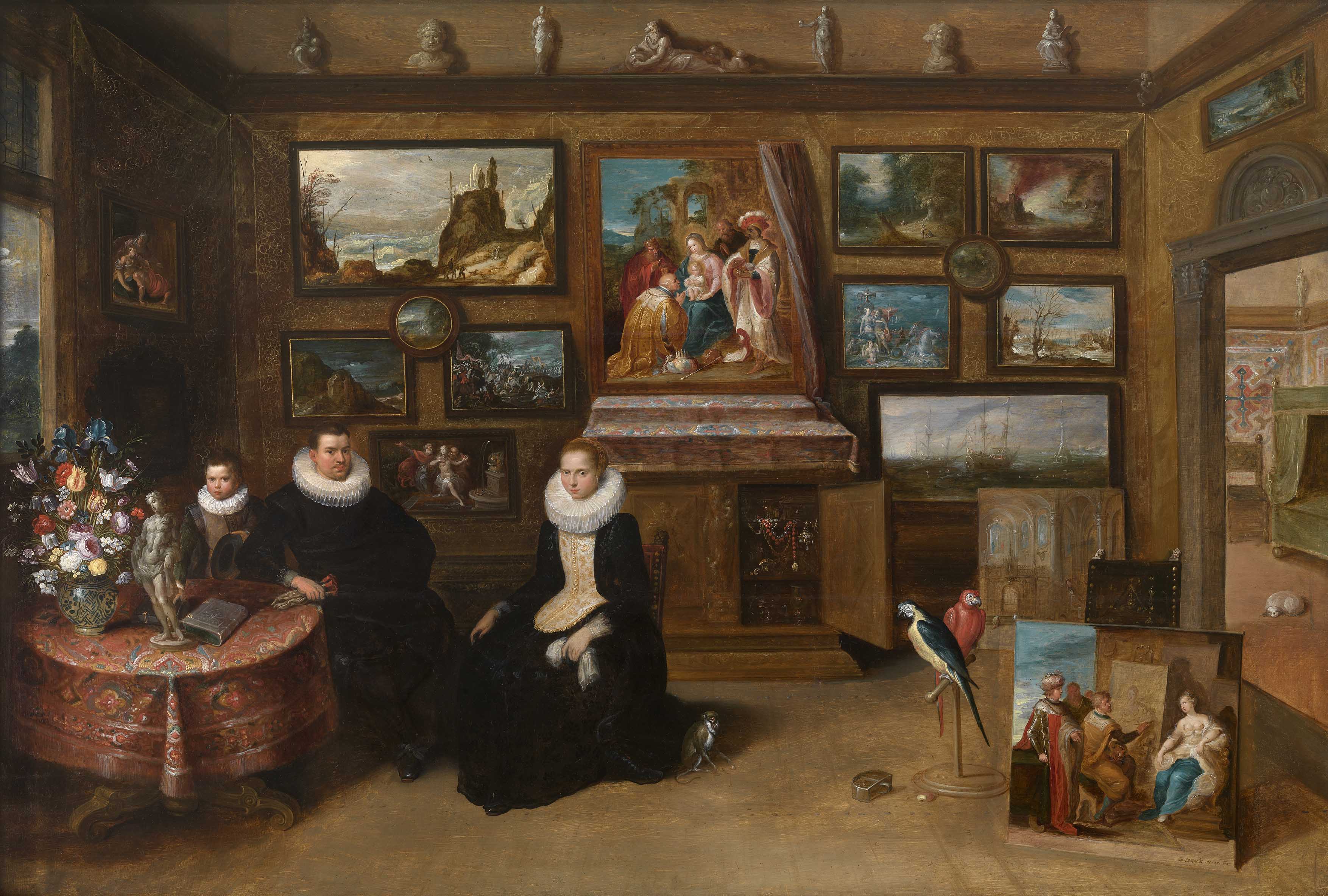 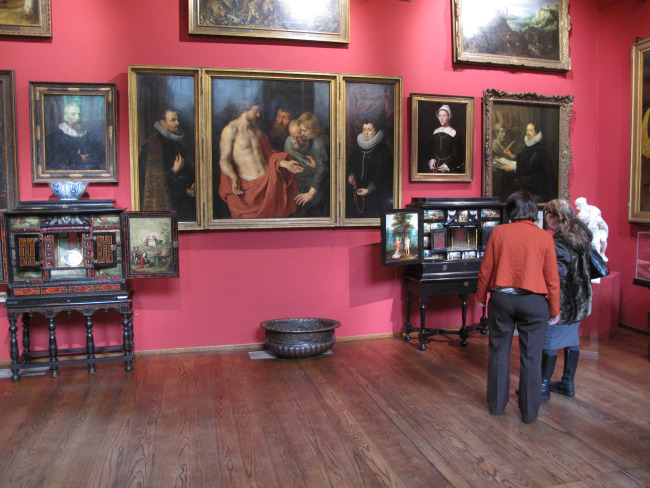 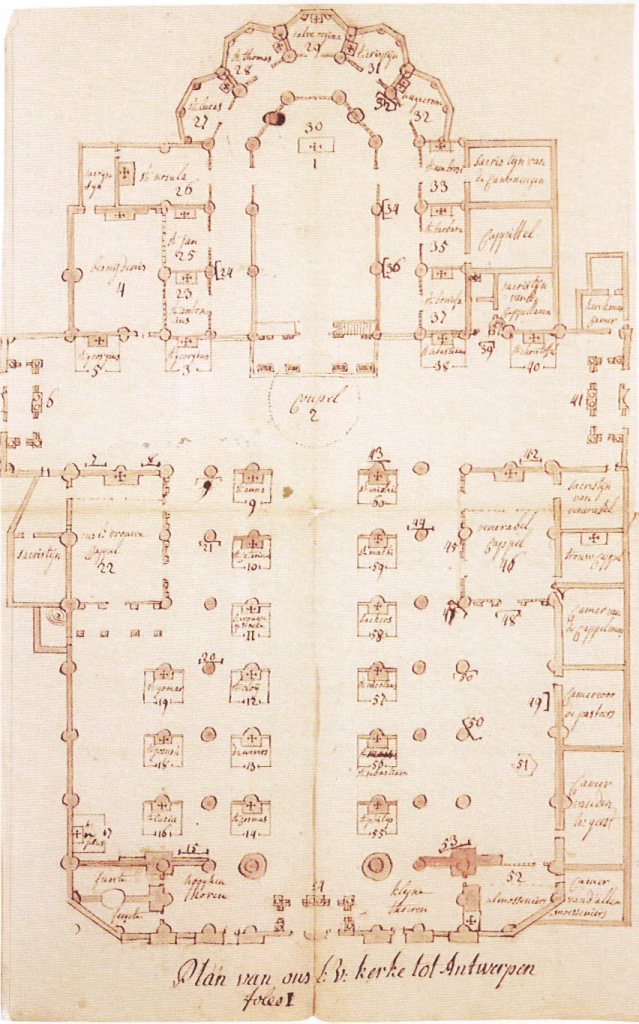 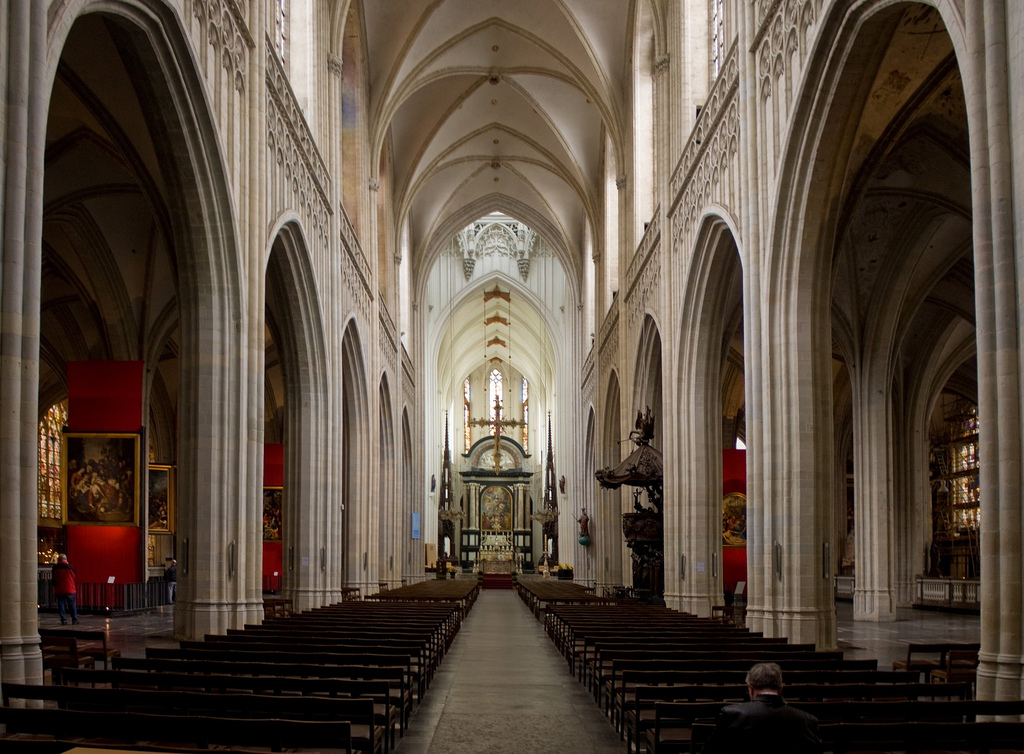 With the museum closed, its eight altarpieces have been moved to the cathedral for display as close as possible to their original locations. In this regard the organizers – the admirable Ria Fabri and Nico Van Hout – have had to make a compromise. The church authorities did not wish to mar the current virginal look of the nave.

Rather, then, than hanging the foremost altarpieces on the nave piers which were once their location, within an exclusive enclosure known as a “tuin,” a garden, they have had to retreat to the side aisles. 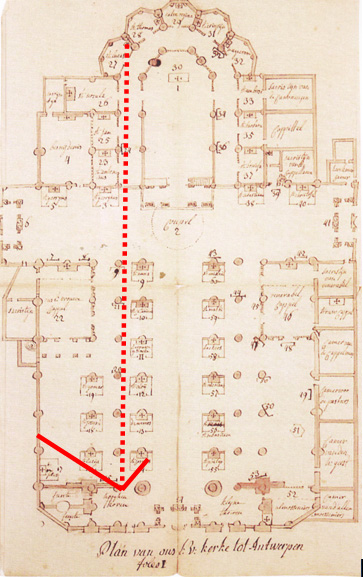 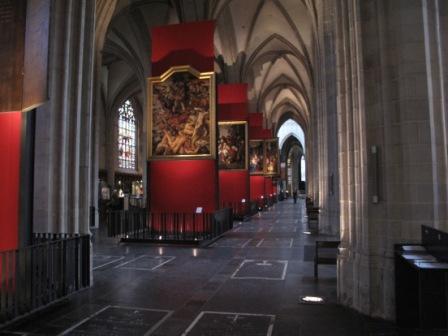 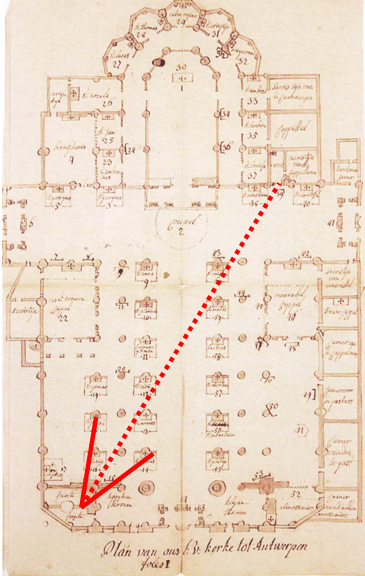 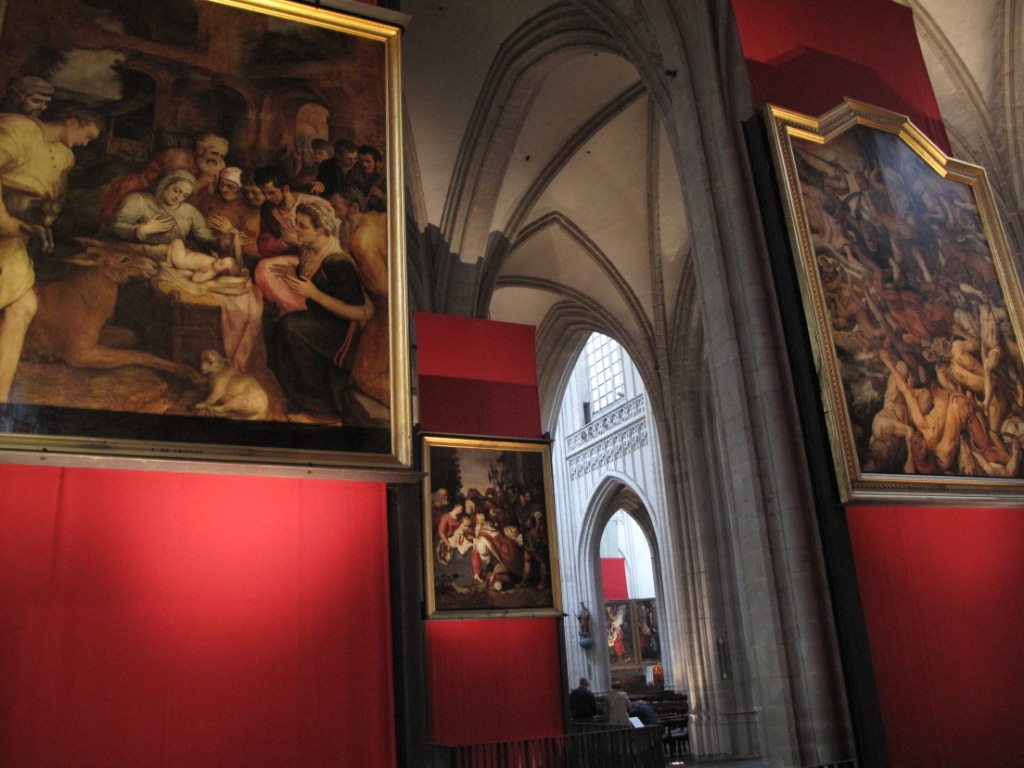 A transverse view from the first bay of the northern aisle, between Frans Floris’s Adoration of the shepherds for the gardeners’ guild and his Battle of the fallen angels, onto Wolffort’s Adoration of the Magi and, into the southern crossing, Rubens’s Descent from the Cross, always in the cathedral, but in the context of the exhibition seen in its historical function as the altarpiece for the musketeers’ guild.

You will have to be quicker to savor another historical rehanging, across the Channel and up the coast to Norfolk, at stately Houghton Hall, the former demesne of Robert Walpole (1676-1745), one of the greatest art collectors of the eighteenth century. (Originally intended to close on 29 September 2013, the exhibition Houghton revisited has providentially been extended until 24 November.) The present heir to the estate, David Cholmondeley, the 7th Marquess of Cholmondeley, on the advice of curator Thierry Morel, director of the Hermitage Foundation UK, undertook the ambitious aim of bringing back to the house 60 of the old masters that hung there before George Walpole (1730-91), come on hard times, sold them in 1779 to Catherine the Great (1729-96), empress of Russia. The total purchase, including heirlooms from other Walpole houses, comprised no fewer than 204 paintings. There was public outrage at the time over this loss of British treasure, and the hiatus of Houghton Hall left a lasting gap in the national heritage. 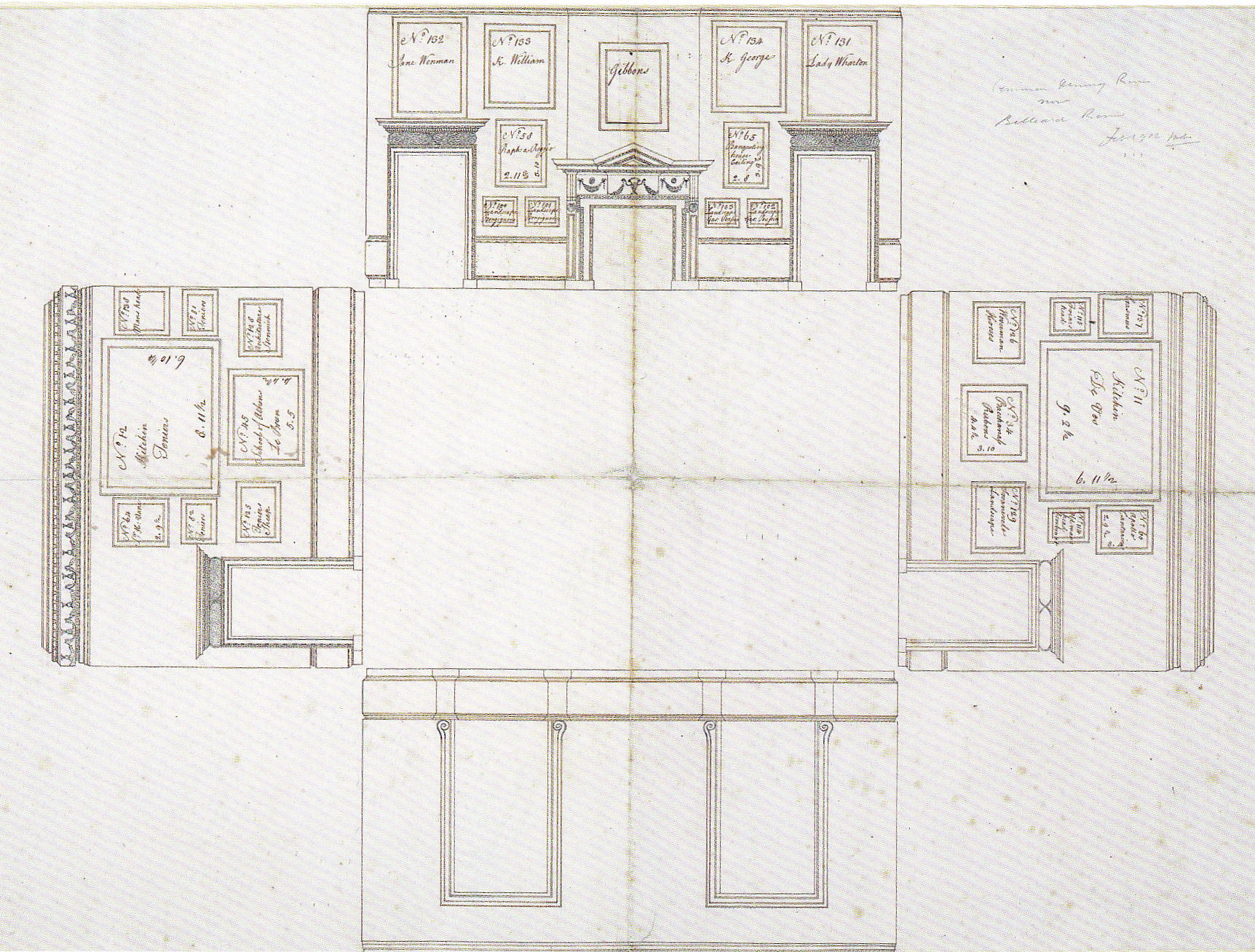 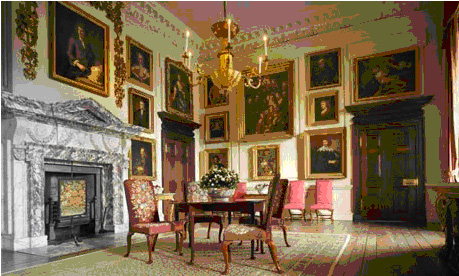 A drawing for the Common Parlour next to a photograph of the hanging for the exhibition shows how close they have been able to come. Above the fireplace, which is in the upper center of the drawing, hangs a portrait by (the German-born, Dutch-trained numero uno of English portraiture) Godfrey Kneller (1646-1723) of the (Dutch-born and trained) sculptor and carver Grinling Gibbons (1648-1721), who created the surrounding garland of gilded wood around the portrait, the motif of which was imitated in the marble relief decorations of the fireplace. How contextual can you get? The Russian empress may have bought this icon of Englishness fair and square, but in St. Petersburg its context cannot be more different. “The Hermitage collection of 16th- to 19th-century English painting includes over 450 items and is of particular importance, bearing in mind the rarity of works by English artists in European museums” (from the museum website). One of 450 examples versus a true one of a kind. Of course not every display in Houghton is as stunningly in its place as the Kneller, but that great prize illustrates the spirit in which Walpole built and furnished his house, its appurtenances and its art. It is saddening to think that after November the sheer rightness of this hanging will be undone, and the spell it casts over visitors will never again in our time do its magic.

© Gary Schwartz 2013. Published on the Schwartzlist on 28 August 2013. See also the beta version on WordPress, with enlargeable image. Responses always welcome at Gary.Schwartz@xs4all.nl.

From September 1995 until April 2007, the items on the Schwartzlist were English-language versions of biweekly columns that were published in Dutch in the cultural supplements of the daily newspapers NRC Handelsblad and then in Het Financieele Dagblad, mainly in the translations of Loekie Schwartz. The newspapers paid for the writing of the columns. When that source of income fell away, along with the pressure of a newspaper deadline, it became impossible to maintain the clockwork regularity of the previous twelve years. With the award of the generous Prince Bernhard Cultural Foundation Prize for the Humanities in November 2009, I was able to charge the writing of columns to that fund, but now the pot is empty.