When P.J. Blok, one of the leading Dutch historians of the first half of the twentieth century, came across a dirty remark in a letter by a leading seventeenth-century personality of the House of Orange, he simply left it out of his transcription. Schwartz digs up the shocking source.

Which fortuitous Google search brought me there I know no more, but a few months ago I found a footnote that I would not have wanted to miss for all the world. It was written in 1924 by the distinguished historian P.J. Blok in vol. 43 of the journal of record Bijdragen en Mededeelingen van het Historisch Genootschap. The article in which it appears had the title `”Een brief van Frederik Hendrik” (A letter from Frederik Hendrik). As every reader of Contributions and Notices of the Historical Society knew, the Frederik Hendrik referred to was the third holder of the office of stadholder in the Republic of the United Netherlands, the commander in chief of a formidable armed force that was fighting a successful war for liberation from Spain. He lived from 1584 to 1647 and occupied his high office from 1625 to his death.

The short, two-page letter was transcribed by Blok in full except for a few words that he excised, explaining in the note that caught my eye that they were “less respectable than they should be” (“Minder oorbare toespeling”). The date of the letter published by Blok, which concerns the love life of “Henry de Nassau,” as he signs, with his family name, is important: 27 March – in a year that could only have been 1624.

In the spring of 1624 Frederik Hendrik’s elder half-brother, Maurits of Nassau, prince of Orange (1567-1625) and incumbent stadholder, was ailing badly and all efforts at court were turned to effecting a smooth succession of his brother to his high office. Although Maurits never married, he felt that it was important for Frederik Hendrik to do so before taking office. Considering the notoriously scandalous manners of the international gang of mercenaries at the military top in The Hague – let your imagination go wild – and the dynastic ambitions of the house of Orange, this was perfectly understandable and sensible. So that in 1624 Frederik Hendrik’s romantic interests were a matter of state. So were appurtenances to his love life, like his portraits of pretty girls.

The situation was described well by Jaap van der Veen in the exhibition catalogue Princely patrons: the collection of Frederick Henry of Orange and Amalia of Solms in The Hague, The Hague (Mauritshuis) 1997.

Of the paintings that hung in the various residences of Frederick Henry and Amalia of Solms, roughly half were portraits of members of the house of Orange, their immediate circle or foreign monarchs and noblemen… The fact that the prince was personally involved in compiling some of these series shows just how important they were regarded…. An eloquent example is Frederick Henry’s reply to a letter informing him of a rumour going around in The Hague that he was planning to marry. Gossip had it that he had hung his own portrait next to that of Amalia. Frederick Henry answered that he had indeed moved some paintings in his mother’s gallery in the house on the Noordeinde and confessed that he did own a portrait of Amalia [van Solms, his bride to be]. Near it were also portraits of Elizabeth Stuart and a lady-in-waiting. He assured his correspondent however that he should not read anything into this. He had apparently ordered that the three portraits be moved to his own study: if he saw them in his cabinet, they might still make him blush. Frederick Henry had thus given orders for the rearranging of his portraits and people in his circle had jumped to conclusions.In short, owning someone’s portraits could imply an intimate relationship.

Indeed, but van der Veen was unaware, due to Blok’s exercise of galant discretion, of just how intimate the relationship was. He did not trace the passage that gave rise to Blok’s thirteen dots of elision. In fact, it was hard to find. The staff of the National Archive was unable to locate it, in the “famous Beeldsnijder collection (State Archive Acquisitions 1883, box IV)” to which Blok referred. All they could come up with was a facsimile of about 1830, in J.P. Houtman’s Facsimiles van onuitgegeven brieven en andere belangrijke stukken van beroemde mannen (Facsimiles of unpublished letters and other important documents of famous men, section 1, nr. 6), concerning which Blok wrote in another footnote that it was “poorly executed,” without saying how. Hereby a photograph of the passage concerned. 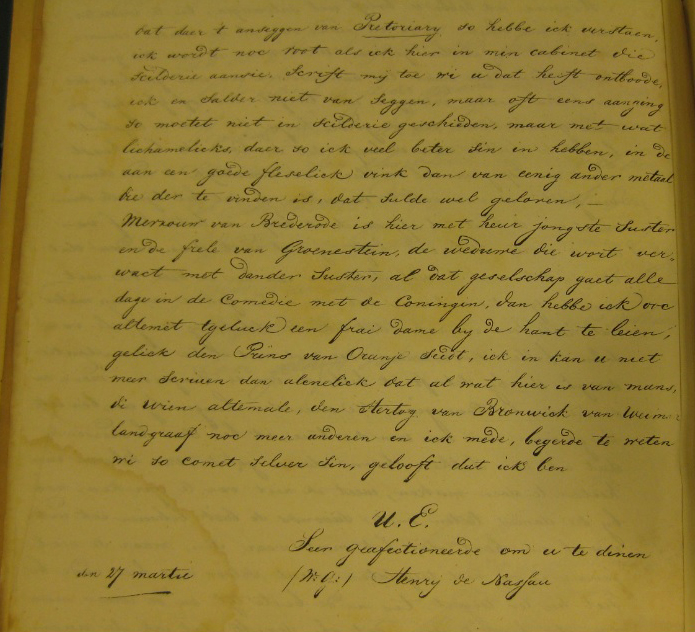 “If I understand you rightly,” wrote Henry de Nassau – who was an ancestor only through the distaff of the present king and his mother – “[they say that] I blush when I see the painting here in my cabinet. [This is an alternative reading to van der Veen’s.] Be so kind as to let me know who told you this. You won’t believe it, but if anything were going on it wouldn’t be in a painting, but with something physical of the sort I like a lot better, in a good bodily vink dan van eenig ander metaal die der te vinden is, take it from me.” The literal translation of the Dutch phrase – “a good carnal finch than of any other metal you can find” – left me and the experts I consulted puzzled until one of them suggested that I consult Eddy Grootes, emeritus professor of Dutch literature at the University of Amsterdam. “Vink,” he wrote me, “is a common expression for the penis,” and he provided me with a reading that makes it clear why Blok too blushed: “If anything was going on it wouldn’t be in a painting, but in a bodily member that I like a lot better, a cock harder than steel.” I read the words “If anything were going on” to mean that something was going on, and I am pleased that it sounds like good sex, which Frederik Hendrik says he preferred to art.

Here we have a rare peek into the hormonal inner life of an historical figure, and the first instinct of the historian is to suppress it. 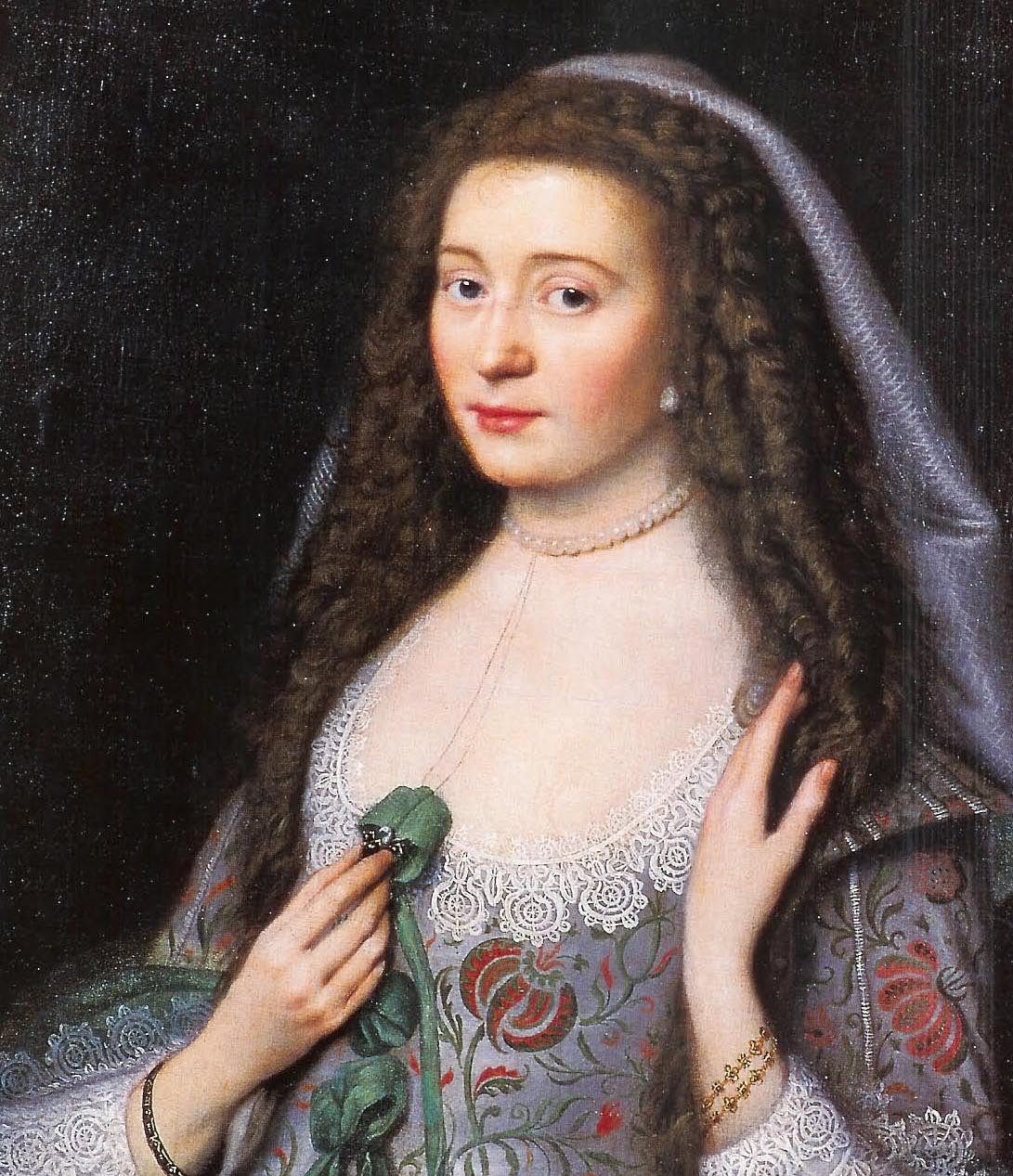 The portrait of Amalia that looks the most seductive is this likeness by an unknown artist in the Museum of Warmia and Mazuria in Olsztyn, Poland, which was published by van der Veen, convincingly, as the portrait referred to in the letter. The décolleté, the hand on the bosom, fingering a ring dangled secretly between Amalia’s breasts, the other hand caressingly pushing back her untied hair, the blossoming floral motifs in lace and embroidery, the loving gaze – between all this and the letter, we are admitted for once into the intimacy of a princely courtship that went beyond matchmaking contracts and chaperoned meetings. How nice.

And Frederik Hendrik? Here is how Michiel Jansz. van Mierevelt portrayed him in the early 1620s, his body language, conventional though it may be, not unreminiscent of his thoughts in the letter. 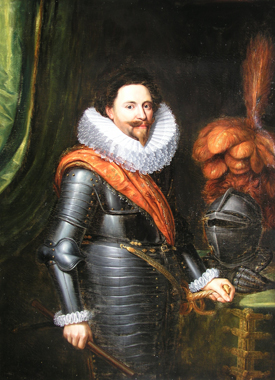 Michel Jansz. van Mierevelt (1566-1641)
Frederik Hendrik painted for the town hall of Delft, 1620-24
Delft, Prinsenhof Museum
With thanks to Robert Baldwin for suggesting that an image of Amalia’s lover be shown to accompany the metaphor in Frederik Hendrik’s letter. Added to Schwartzlist 330 a few hours after the initial posting.

© Gary Schwartz 2014. Published on the Schwartzlist on 27 February 2014. 3 March 2014: revision of information concerning ancestral relationship of Frederik Hendrik to present monarchs of the house of Orange, thanks to Erik Schoonhoven.

“The lies and hypocrises of politicians are nothing new to him. They never were. So why now? Why leap on his soapbox and rant uselessly against the same things that have been going on since the first politician on earth lisped his first hypocrisy, lied, wrapped himself in the flag, put on God’s armour and said he never said it in the first place? It’s old man’s impatience coming on early. It’s anger at seeing the show come round again one too many times.” John le Carré, Absolute friends, London (Hodder and Stoughton) 2003, pp. 255-56.

In the present case (let’s not talk about old age), it’s also anger at seeing the show being performed by politicians and a party I respected and even voted for in the last election, the Partij van de Arbeid (Labor Party). There was not even a good Machiavellian reason for their transparent insincerity.

For readers abroad: Last October Home Affairs Minister Ronald Plasterk assured the populace on television that if 1.8 million items of private internet communication sent by Dutchmen had been copied by security forces, as Der Spiegel reported Edward Snowden to have charged, this was not done by the Dutch services, which would have been committing a felony if they had done so, but probably by the Americans, who would not have been in violation of US or Dutch law. He pulled a piece of paper out of his pocket, on air, suggesting that it was a communication from US intelligence acknowledging his denial, and he declared solemnly that he had investigated the matter thoroughly and knew what he was talking about. It now emerges that even if he did not know at that moment that he was wrong, he was advised within weeks (I’m sure it was more like minutes) by Dutch intelligence that the infringement had indeed been performed by them, and that they had provided the data to the US. Plasterk and his colleague Jeanine Hennis-Plasschaert, Minister of Defense of the right-wing VVD party, did not find it necessary to correct their misrepresentation of these sensitive facts until February, when a private lawsuit against the government threatened to expose them. They tried to mumble the revision in the hope that no one would notice it or care about it. The opposition parties in Parliament did, and tried to force Plasterk to resign. He stonewalled and is still in place.

In acknowledging the truth about the internet messages, Plasterk kept saying that he had been “speculating” about something of which he was not sure, apologizing profusely for doing so. Never mind that what he had done was not speculation but deliberate and flagrant deceit and abuse of his authority, maintained for months. The reason he did not correct himself in public, he said in a speech that could have come out of Alice in Wonderland, was that doing so would compromise intelligence procedures. Added up, what these excuses amount to is that the cabinet can retail to public and Parliament whatever lies it likes, with no sanction for the crime and no way for anyone to find the dissemblance out. Sickeningly, he, Hennis and Prime Minister Rutte were allowed to get away with these lame and lying prevarications, and the cabinet was saved. What gives my old-age impatience an extra spin is that the cabinet could have stayed on no matter what it said – it had the votes, so let the critics talk their heads off, as the head of the Labor faction Diederik Samson remarked cynically going into the debate – so they might just as well have been candid, if belatedly.

Then there’s our Labor Minister of Social Affairs, Lodewijk Asscher, badgering Brussels and Paris like a neocon to build intra-European barriers to labor migration and thereby sabotage one of the great gains of the European Union. Otherwise, he said again and again in 2013, the effects would be disastrous, naming in particular the “tsunami” – the word stuck – of Bulgarians and Romanians that was expected to wash over the Netherlands after January 1st, 2014, when restrictions were removed. Well, sir, when this morning the results were announced of new registrations in the region of Zuid-Holland Province where migrants are hired on a large scale for greenhouse farming, it turned out that in the first eight weeks of 2014 exactly one Bulgarian and one Romanian had registered. To the explainers-away about catch-up effects and non-registrants I am not listening.