On Tuesday evening, 3 February 2015, a commuter train from Grand Central Station to Westchester County and Connecticut crashed into an automobile on a crossing in Valhalla, New York. Of the more than 600 passengers in the train, six in the first car were killed in a fire caused by the crash. Among them was Walter Liedtke, a friend and colleague of Gary Schwartz. With their first exchange of letters.

Whenever there’s a bad storm or flood anywhere in Europe I get worried mails from family members in the States hoping that everything is all right with us. I am of course too sophisticatedly aware of distances and probabilities for that. I didn’t even worry about my sister in Medford, Massachusetts when a snowstorm hit Boston last week. Indeed she turned out to be snug at home and delighted to be able to chill out for a day while my brother-in-law went cross-country skiing with a friend.

So when the story of the Metro-North train crash in Valhalla, New York, hit the Dutch news, the first thing that crossed my mind was that after living away from New York City for fifty years I was not likely to have known anyone on the train. I was wrong. One of those who died was Walter Liedtke, a curator of European paintings at the Metropolitan Museum of Art, whom I have known for forty years. The shock of his sudden, horrific death was somehow magnified by the unlikelihood that anyone I knew would be among the six fatalities of that accident, on a train with more than 600 passengers. It was further augmented by my acquaintance, through a tai chi class of which she was the brilliant star, with a Dutch woman, Edith Ploeg, who perished when flight MH17 was shot out of the air half a year ago. But she was one of 298 victims on a flight originating in Amsterdam. The chance that I would have been acquainted with one of them was far greater than in the case of the New York train crash.

To think about Walter at a moment like this is not easy. Recollection demands a certain peace of mind, to allow association, winnowing and placing to do their work. Shock and horror impede that. So I went to the attic and took down my correspondence with him. The first letter, which he wrote to me from London, is dated May 15, 1974. He was working at the Courtauld Institute on his PhD dissertation, “Architectural painting in Delft, 1650-1675.” His letter deals with a mix of subjects about which we corresponded and talked for years afterward: study of the work of Pieter Saenredam, on whom I had written an article in 1966; questions of attribution; art-historical methodology, including optical experiments; salutary self-criticism; how to get articles and books into print (I was then a publisher and editor of the journal Simiolus: Netherlands Quarterly for the History of Art); career problems in art history; personal ties; contention with Arthur Wheelock, who was later to become curator of Dutch and Flemish painting at the National Gallery of Art. (See his in memoriam in The Wall Street Journal.) In the 1980s the overlap between our areas of interest spread to Rembrandt. From different starting points and with different conclusions, we both had fundamental objections to the Rembrandt Research Project and its Corpus of Rembrandt paintings.

A matter on which we disagreed was the role of connoisseurship in establishing the authorship of works of art. My conviction that the quality judgments of classical connoisseurship were inadequate for the purposes to which they are put did not faze him. Whatever the strength of my arguments, he deflected them forthrightly by saying “I just don’t listen any more to those who tell me which interests are wrong, especially when they’re mine,” which for better or worse is closer to how things work in art history than my insistence on logic and demonstration. It was also characteristic of Walter’s unflappability.

None of our differences ever got in the way of friendly and collegial relations. We called on each other readily, always certain of a sympathetic response. While he could be sarcastic and dismissive in his judgments, in person he was disarming – disarming even himself with surprisingly gentle irony. As these things go, I am somewhat consoled that our last meeting was so friendly and pleasant. On 14 October 2013, Walter and I were successive speakers at the fifteenth-anniversary celebration of CODART in the Rijksmuseum. Afterwards he and Loekie and I had a drink together at Café Welling, enjoying the afterglow of the celebration and the atmosphere of an iconic Amsterdam pub.

I can think of no better way at this fraught moment of honoring Walter and evoking his intensity and dedication than by publicizing his first letter to me. Walter was twenty-nine years old in 1974, I thirty-four.

© Gary Schwartz 2015. First published on the Schwartzlist, 7 February 2015.
Responses are always welcome and will be answered. 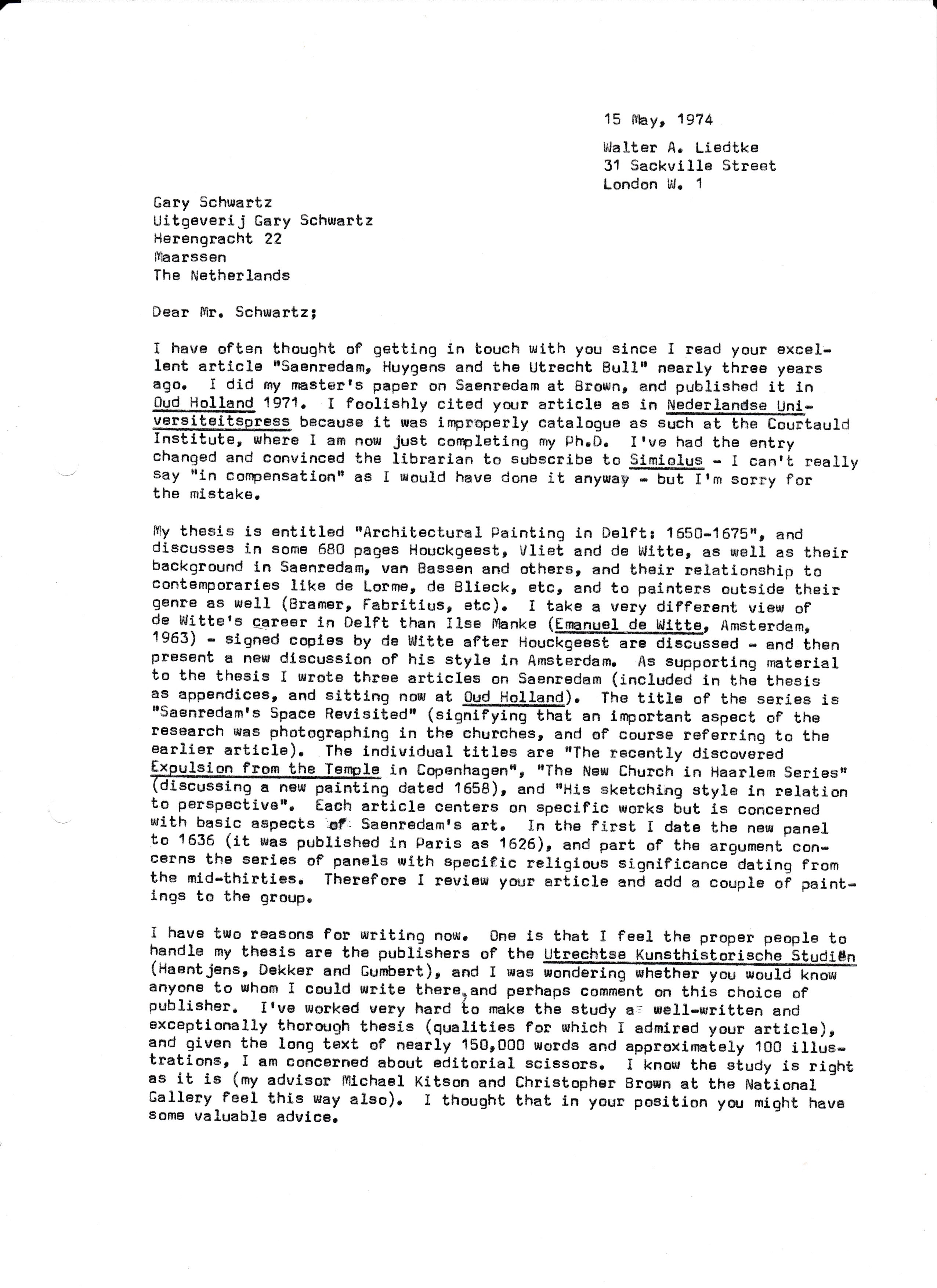 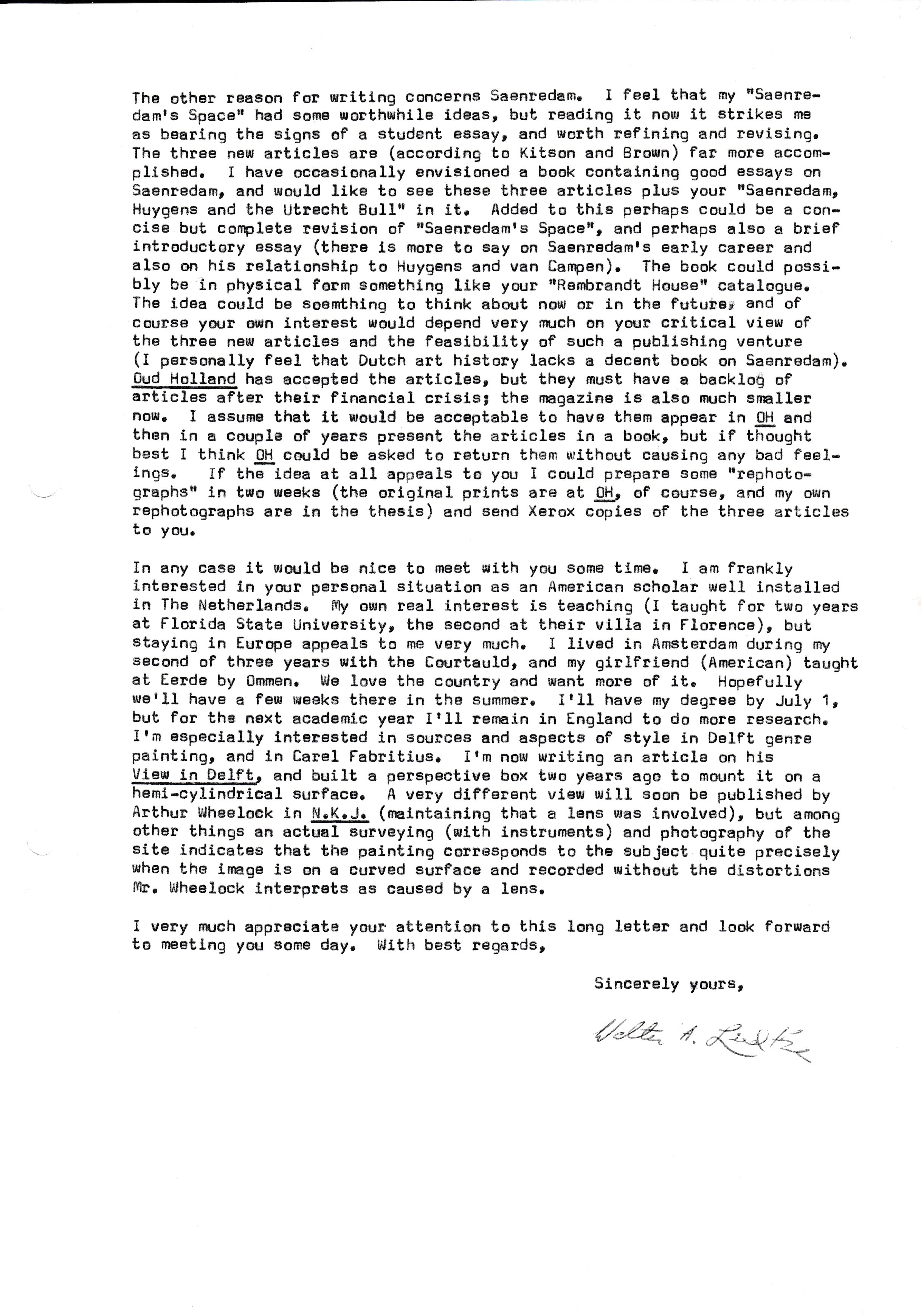 In 1974 Walter was looking forward to a career in teaching, his “real interest,” and he was entertaining the idea of staying in Europe. Five years later he entered the Metropolitan Museum of Art, where he found that he could fulfill his didactic ambitions and be a living part of European artistic life while enjoying the daily satisfaction of direct contact with paintings and play a role of increasing importance in a great institution. The Met offered him even more than he had expected from life in art history. That knowledge too is a source of consolation.