One of Europe’s greatest historical print collections is turned into an exhibition hall.

A major public collection of prints and drawings has three kinds of visitors. The general public is received in an exhibition gallery where there will always be one or more shows running. Serious amateurs and collectors can go a step further. After showing a passport, they will be admitted to a reading room, where they can ask to see the boxes with prints or drawings of a particular master. (Needless to say, most large printrooms draw a line when it comes to casual requests for drawings by
masters like Michelangelo or Rubens or Picasso. Nonetheless, I heartily recommend to all readers that they take advantage at least once of this facility, if only for the thrill of holding in one’s hands a precious work of art. All it takes is a bit of nerve.)

Then there are the professional curators and art historians who are out for
close encounters of the third kind. Typically, they will work in long campaigns, studying exhaustively every last sheet by a certain group of artists. After corresponding with the keeper in charge, they will
show up at the study room of a repository like the Cabinet des Dessins of the Louvre or the Rijksprentenkabinet in Amsterdam and work from morning to night for days or weeks at a time.

Until recently, one of the most important way stations in this behind-the-scenes circuit was the Graphische Sammlung Albertina in Vienna, based on the collections of Albert, Duke of Saxe-Teschen (1738-1822) and now an Austrian state institution. Unique among the great print rooms of the world, the Albertina is not attached to a museum or a library, and is devoted nearly exclusively to art on paper.

Not to put too fine a point to it: for the moment, the Albertina has
decisively turned its back on the latter two groups of visitors – amateurs and art historians – and now devotes itself entirely to exhibitions for the general public. In keeping with this policy, the spaces in the museum formerly reserved for the storage and study of prints and drawings have been turned into exhibition areas. The 19th-century wooden cabinets in which the collection was housed have been dismantled and the holdings moved to the Österreichische Nationalbibliothek. Offices where specialist
curators once worked on collection catalogues have been turned over to new staff in charge of fundraising, sponsor relations, events for corporate clients, catering and other managerial and commercial functions. The remaining curators have had their tasks redefined from the systematic study of the collection to organizing one-off exhibitions, regardless of whether they are specialized in the area concerned. No concrete plans to open a study room for scholars have yet been confirmed; the collections are virtually inaccessible to researchers.

For a student of Rembrandt, the changes have a particularly intense charge. The standard catalogue of Rembrandt’s etchings was compiled in Vienna in 1797 by Adam von Bartsch, the chief advisor of Duke Albert, and that of his drawings by Otto Benesch, who was director of the Albertina from 1947 to 1961. As recently as the year 2000, it warmed my heart to read what Benesch’s successor, Walter Koschatzky, wrote in a volume on the history of the museum:

From its very inception the Albertina has preserved the magnifying glass used by Adam von Bartsch. It has become a tradition for retiring Directors of the Albertina to hand on this magnifying glass to their successors like a baton in the relay of intellectual and spiritual commitment. It always reminded me that, as researchers and scholars at the Albertina, we were all committed to one special philosophy. 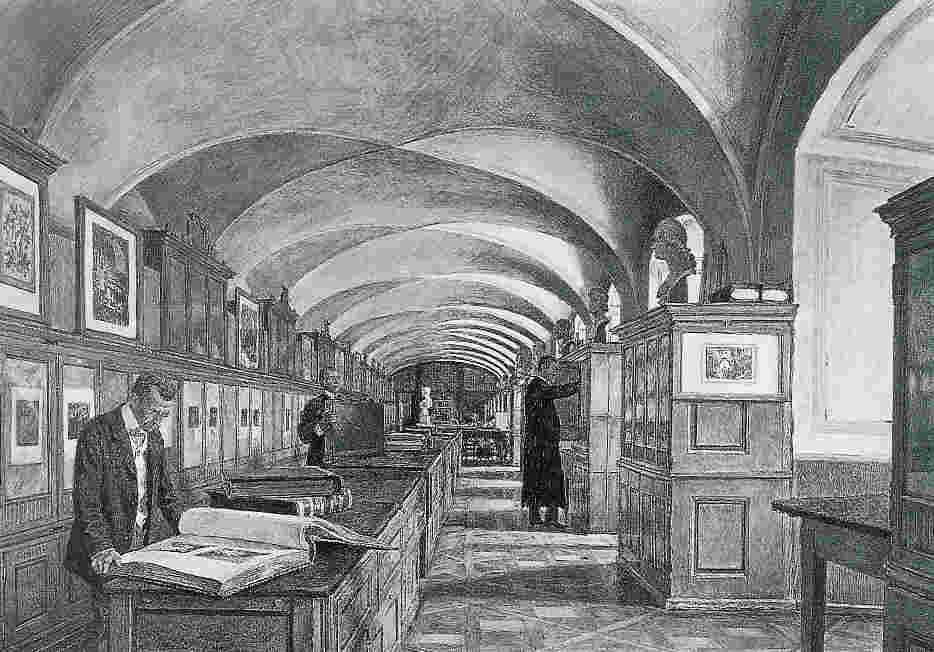 Carl Müller, Joseph Meder in the Joseph Meder, 1915. The cabinets were broken up and discarded around the turn of the 21st century.

That is not the philosophy of the present director, Klaus Albrecht Schröder. Schröder has broken the 200-year-old mold of research and scholarship – accompanied in the course of the 20th century by an outstanding program of exhibitions and catalogues – in favor of a lopsided favoring of the general public. In this he has been quite successful. In the first nine months after the Albertina was reopened in mid-2003, the museum attracted more than 800,000 visitors. As intoxicated as he may be with this success, I nonetheless cannot believe that Schröder is not smart enough to realize that the quality of his exhibitions depends on the knowledge of his curators, that this depends on the research conducted in the Albertina by outside scholars and that this research cannot be performed unless the museum provides good study facilities and normal opening hours.

Perhaps in emulation of Bartsch and Benesch, Schröder has now put his name as “Herausgeber” to the catalogue of a quite creditable (and very enjoyable) exhibition in the Albertina called simply Rembrandt. To anyone in the field, it is however apparent that he performed none of the research for the exhibition, and that his contribution as writer is limited to the three-page foreword. The work was actually done by the Albertina curator Marian Bisanz-Prakken, with essays by excellent Dutch and German specialists.

The guiding motive of the exhibition is expressed in the title of Bisanz-Prakken’s concept statement: “Vielfalt als Prinzip im Werk von Rembrandt.” Rembrandt indeed seemed unable to rest until he had challenged and surpassed the specialists in every thematic and
technical area being practiced in the Netherlands of his time. Relying on recent scholarship, especially by Ernst van de Wetering with regard to Rembrandt’s paintings and Peter Schatborn to the drawings, Bisanz-Prakken has assembled a group of 30 paintings, 80 drawings (about one-third from the Albertina itself) and 70 etchings (nearly all from the Albertina) covering all periods and most subjects and techniques. (Notably absent are the copperplates that have increasingly become part of Rembrandt exhibitions of the past ten years.)

In its close combination of media, the Albertina exhibition is similar to Rembrandt’s journey: painter ● draftsman ● etcher now on show in the Art Institute of Chicago, which originated in the Boston Museum of Fine Arts. This is a new departure. Traditionally, work on paper is exhibited separately from paintings. In the Rembrandt exhibition in Berlin, Amsterdam and London of 1991/92, the prints and drawings were displayed in completely different spaces – in London, even in a different museum.

This development may be an adjustment to the economics of blockbuster
exhibitions. Prints and drawings are less expensive than paintings, they are easier and cheaper to transport and they take less wall space to show. If a museum can bring in the same crowds for a smaller investment, it will.

It must be said, though, that is not the way the American and Austrian
exhibitions achieved their mix. Both started out as straight shows of work on paper, coming out of print rooms. It was at the insistence of the respective directors of the two organizing museums – Malcolm Rogers at the Boston Museum of Fine Arts and Klaus Albrecht Schröder at the Albertina – that paintings were added, because the public tends to prefer them to drawings and prints. The curators then saw themselves faced with the necessity of justifying the mixture and making it appealing to the
eye. (Although the American show, to my mind, is more successful in this respect, the Albertina succeeds quite well in its own way in combining media. It is a pity that the two shows are taking place simultaneously and therefore in direct competition for loans. Combined, they could have been
even more exciting than they are.)

Alongside these opportunistic motives, something more basic is also involved. For much of the 20th century, art critics tended toward a puristic conception of “the medium.” They expected of great painters that they were engaged in a profound dialogue with the art of painting as such, woodcarvers with the art of woodcarving, independent of subject and style, let alone function or price. The extremes to which this unhistorical attitude could lead is demonstrated dramatically by another highly recommended exhibition that I saw halfway on my journey to Vienna, in Würzburg: Tilman Riemenschneider (until 13 June). In the course of the 20th century, nearly all the original polychromy and gilding on the statues of this early 16th-century German sculptor were removed. Critics and
restorers thought a colored finish unworthy of the formal integrity of great sculpture. In this way, they created a narcissistic and downright false image of the art of Riemenschneider by destroying the surface of his sculptures.

Fortunately, this dogmatic legacy of modernism is on the decline. The
willingness of museum curators and directors to mix media in Rembrandt exhibitions reflects the same spirit in which the museum of Würzburg now questions its own earlier restoration practices. It may be too late to restore the color to Riemenschneider polychromy , but in Vienna, as in Boston and Chicago, we are enjoying a more colorful Rembrandt than we have known until now.